Yesterday evening we had a bit of entertainment when members of the Runcorn rowing Club arrived, shall we just say they were not all of the same skill level, but no one got rammed and no one

ended up in the water. I wouldn’t want to balance them.

This morning our neighbours left about quarter to ten  after the skipper wandered down for a chat, they were heading for Northwich for the night following a day in town. 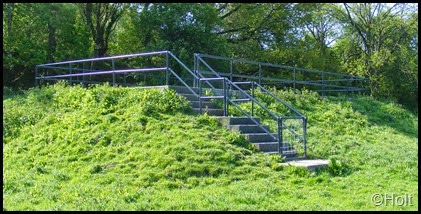 it which I understand is the valve chamber on the water supply to Liverpool, it seems it requires 50 turn on this valve to shut their water supply off. 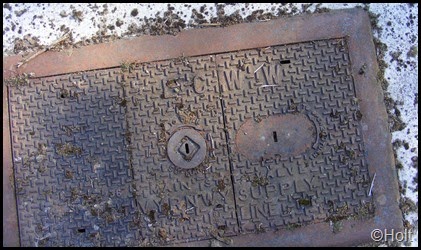 It was about twenty past ten when we set off, thankfully the forecasters got it wrong and it was tee shirt weather. We were still heading down stream, not long after leaving the moorings we passed this in the distance which I suspect has a couple of Clay 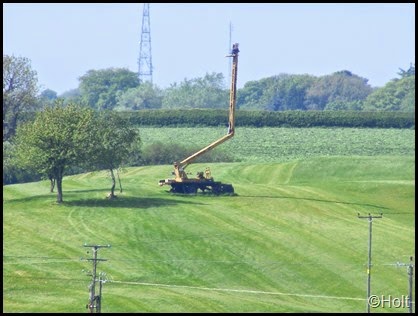 Pigeon traps mounted on it. On our return journey there was a group of people quad riding around the field.

Next on the agenda was Frodsham cut, this use to be the route

down to the River Weaver. we would call in here on our way back upstream.

Next on the list was Sutton Swing Bridge, this has recently been taken away and restored to its former glory. 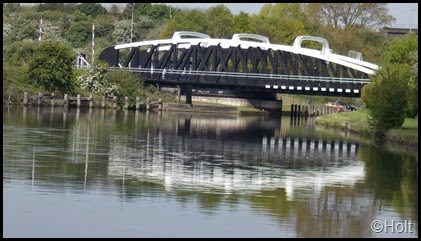 Very close to this is Sutton Rail Bridge which crosses the river at high level giving a suitable air draft large vessels to pass. Because of its high level like all the rail crossings on this river the

approach rails run on a high viaduct.
This is soon followed by a third crossing, this time its the M 56 Motorway and when we passed it was doing a pretty good impression of a car park, I know you cant tell if the traffic is moving but you can see how close they are. So three crossings in

half a mile. There are some visitor moorings between the motorway and the rowing club but I really wouldn’t fancy them, I don’t think its the quietest section of river to overnight. There use to be a swing bridge by the rowing club but all that is left now is the pin and track. 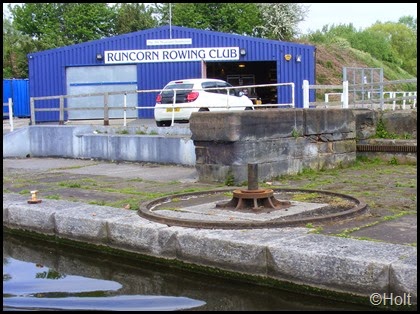 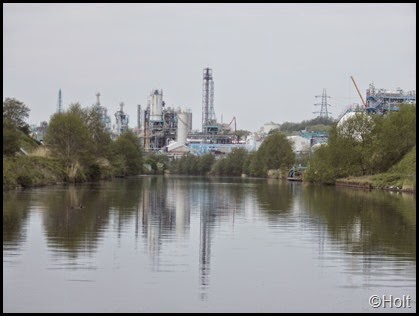 river. I think the stares on the spherical storage vessels are a work of art the way they sweep up and round at the same time. 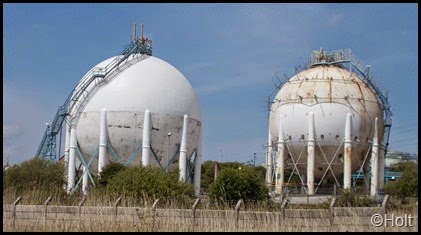 At the end of the chemical works there is an old arm off to the right, this use to be the Runcorn and Western canal. 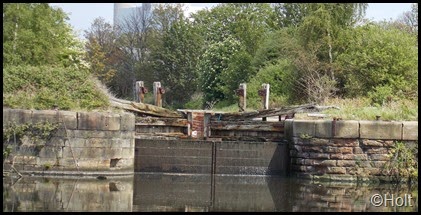 This was owned by the Earl of Ellesmere and opened in 1859, connecting the Bridgewater with the Weaver. We had to wind here as a 100 or so yard further on is Whites Swing Bridge and 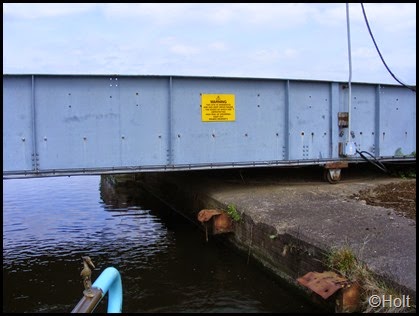 this only has a couple of feet clearance above the water and it is only opened for boats to enter Western Dock not people like us. However we did of course reverse up right against it.

doesn’t appear to be much happening. Just to the left of the photo but out of shot is a wall made from pallets of bags of compost from the Weaver to the Ship Canal.

We headed back up stream, we only saw one person on the whole of the chemical works which must be over 2 miles long. I did notice a steam valve that requires a bit of maintenance through. 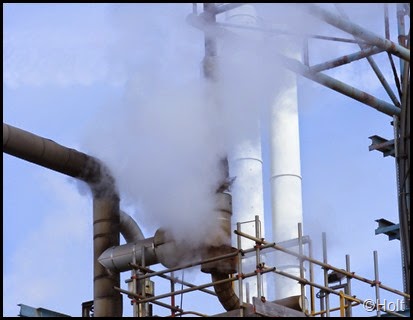 We stopped at Mash Lock for lunch, mooring on the lock moorings, well the lock is only open for 4hr a week on a Saturday by appointment, so I don’t think we would be in anyone's way.
We had a walk round the lock,it has several intermediate gates including one set facing the tidal section. I don’t know if this bit of the Ship canal/River Weaver ever gets higher than the part we were on 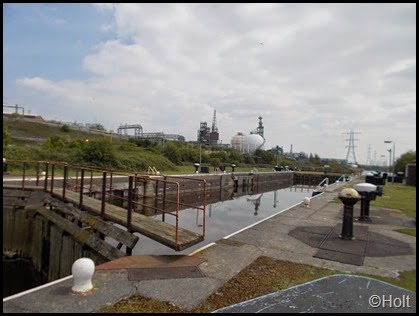 From the down stream end of the locks you look out across where the Weaver tee’s into the Manchester Ship Canal on a bend. the Weaver goes up stream to the left with the canal running off to the right and coming in slightly to the right opposite. 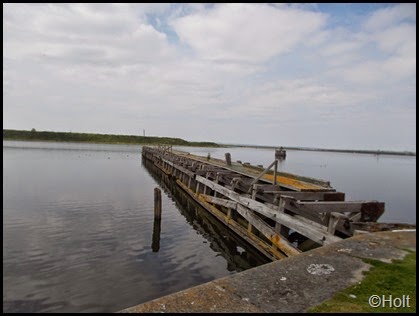 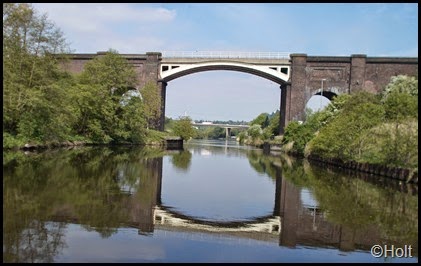 motorway bridge in the background, before making a brief rubbish disposal and photo stop at Sutton Swing Bridge. While Diana was disposing of rubbish and taking photos of the bridge from a 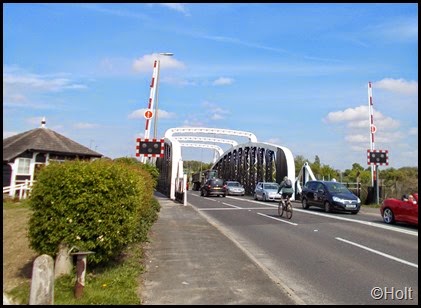 different angle I spotted this post at the end of the moorings. It has engraved on it RWN which I take to mean Runcorn Weaver Navigation, under that is 16/11th and then the year 1916. Any ideas please. 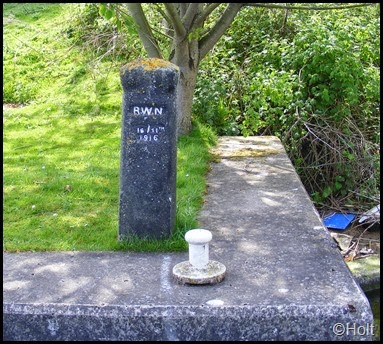 When Diana was back we headed up to Frodsham Cut where we moored just above the junction and walked down and look at the old lock that use to take boats down to the Mersey before Western point and Marsh Lock were there. Notice that CRT have not found this yet and the notices are still the BW ones without

BW having a CRT sticker put over it. What we didn’t expect to see on the Weaver was this, he was so fast I had a job to get the picture . 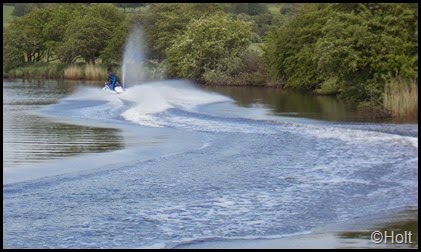 At Dutton lock we had to wait while the keeper turned the lock for us, I think he drew the paddles then went for a quick cup of tea, repairing at the exact moment the lock emptied, perfect timing. He lowered a line to take our bow and stern lines, but the locks fill very gently and we would have been fine on just a centre line. As you can see the paddle culverts are a bit bigger than the Grand Union locks. 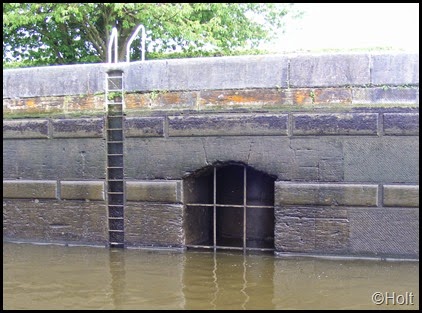 We thought it would be nice to moor at Acton Bridge but we had forgotten it was Friday and ahead lays the weekend, It looks as if the Thames habits have migrated up here with people moving out of the marina for the weekend, The moorings were full

and as we passed under the bridge we met two more boats looking for a mooring. There is a pub here and also an Italian restaurant so maybe that’s the draw, The down side is every time a car goes over the bridge there is a very loud clunk. I don’t know where they moored especially if they had a table booked but we carried on up and moored below Saltersford Lock for the night as by the time we reached there it was closed.

One point to watch on this waterway is that the moorings are quite high and where they are on top of piling it is possible for the gunwale of a Narrowboat to go under the woodwork and the edge of the walkway to rub the cabin sides. To stop this happening we float a pair of wheelbarrow wheels between the boat and the piling. We had just finished mooring up at 5-30 pm when it started to rain, even then it didn’t last long. I hope tomorrows forecast is just as accurate. 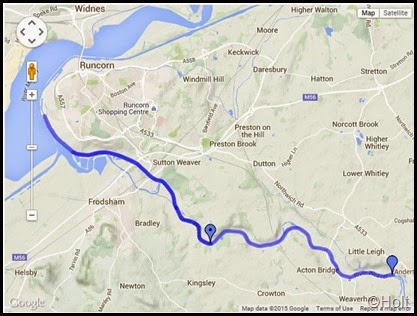