First a couple of updates. On Monday I posted about the new building at Aston Marina, Geoff informs me that this is a new wedding venue that they are building, he also told me something I didn't know about Bridge 8A on the Caldon canal, that is the cantilevered one that I mentioned. It would seem that it is actually the second 8A foot bridge in that location, the first was fitted with Plate Glass side walls and in case you can’t guess what happened to it Geoff sent me a photograph. 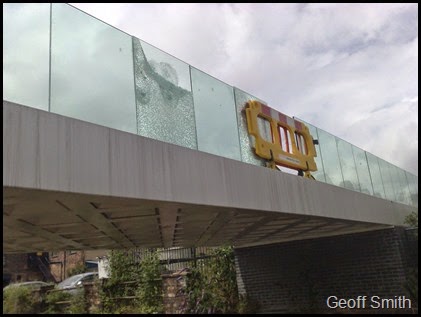 Anyway this morning after a very peaceful night we woke to the rain falling on the roof, by 10 am it had stopped so we pushed off into what was to turn into a cold and showery day, luckily the showers weren’t too bad but the wind quite nippy.

I think this is a beautiful canal and on par with the Llangollen, OK it hasn’t got the Aqueduct but it hasn’t got a quarter of the boats ether. Just look at the views

Below Engine Lock not only does the bywash come in on the left, the larger low level gushing water but there are also two smaller flows of water at much higher level, the first almost at ground level and a good way back from the lock. 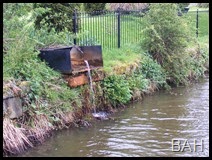 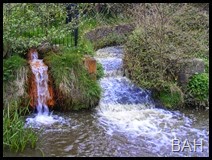 Another strange thing I noticed about Engine lock, it is quite a deep lock, is that the water from the offside paddle looks as it it 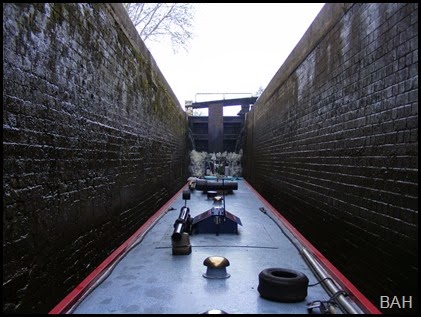 enters the lock right down by the bottom gates, whereas the towpath side paddle seems to discharge half way down the lock. Hopefully someone with knowledge of the canals makeup will be able to answer this.

A little further on there were a pair of Duck with an identity crisis, they  obviously thing they are Hedge Sparrows, which make you wonder where they have built their nest? 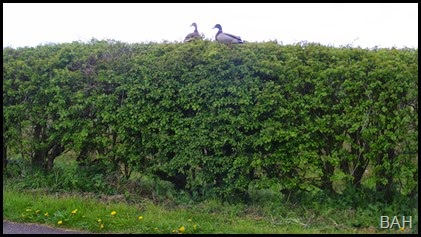 Diana took the boat up the Stockton Brook Flight while I worked the locks, this gave me a better at the old Staffordshire Potteries Water Board pump house. It really is a fine building and it seems criminal that it is being allowed to fall into disrepair, I can just imagine it on George’s “Amassing Spaces”, or “Restoration Man”. 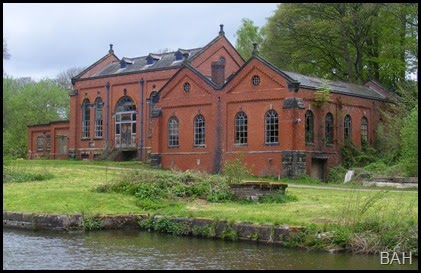 It would make a great hotel or wedding venue.

The gates still support its name in cast plates which is a surprise, I would have expected them to have gone long ago. 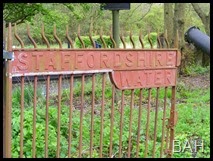 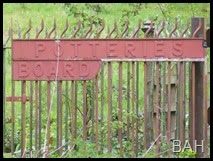 Our luck improved wile we were in the third lock as we saw a hire boat coming down, so not only could we leave the gates open but also the next would be with us. Nearly all the boats we have seen on this canal this time have been hire boats or shared ownership ones, there were 5 or 6 shared ownership boats at Etruria alone and another hire boat moored on the lock moorings below the top lock. Above the top Lock CaRT have put in some splendid lock moorings with yards of piling and hard edge but they have only put sufficient bollards for one boat to wait at, I will get a photo on the way down if its not raining to hard.

Diana walked ahead to operate the lift bridge which like many is hydraulic requiring the use of a windlass to operate the rotary hydraulic pump, once through she walked on to the second No.23 but rounding the bend she could see it was already up. I am not sure who left it up, but the bridge is actually part of a footpath that runs close to a large house close to the canal.

We stopped to fill the water tank at CaRT facilities above Endon where we actually saw another private boat on the move, he was heading down to Consall and asked if I knew the present state of the river Churnet as the canal and river share the same water for a bit, unfortunately I was unable to help him. At Hazlehurst junction we turned right onto the Leek canal. Or plan had been to go to the end, turn and return to the aqueduct for the night, but as the weather was showing no sign of improving and there was just one space on the moorings by the aqueduct we decided to stop for the day. We had just moored up when it really started to rain hard, so it was a good decision, I just hope I don’t get too wet going for a pint tonight. 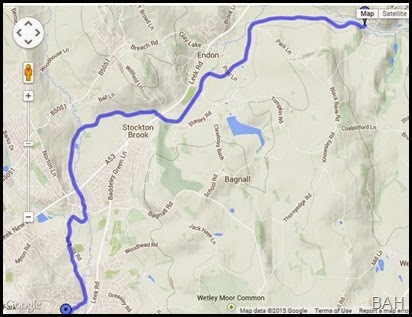