We woke to a lovely sunny morning and turned on the radio just in time for Radio Stoke to say there is a wet weather front moving in from the north, and they weren't wrong.

We set of about quarter to ten moving much easier than when we came up, this was due both to the slight flow downhill and a clean prop, it does help. The electric lift bridge does seem to move slower than last time we were up here which was just after it had opened following refurbishment, however as soon as the barriers are down the bridge starts to move so they have removed unnecessary delays from the system.

We found Planet lock in our favour and a boat was just leaving the top of Bedford Road staircase as we arrived assisted by who we thought was a CRT volunteer, He ran down the locks to drain the bottom chamber as I entered the top and was back up ready to draw the intermediate paddles for me. Once he had seen up out of the bottom chamber and the gates were shut he ran to the Stoke Locks to work them. I thought it strange he wasn’t wearing a CRT issue Lifejacket and when Diana was back on board I found out why. He wasn’t a CRT volunteer at all, he had been for a while but didn’t like being “posted” to different locks to work, so now just turned up at Etruria to work these locks.

We rejoined the Trent and Mersey Canal and headed north, just past the junction a garden has an interesting collection of plastic animals. Just north of Festival Park a Canada goose with odd markings was sat on her nest. The body is OK but look at her head and face. 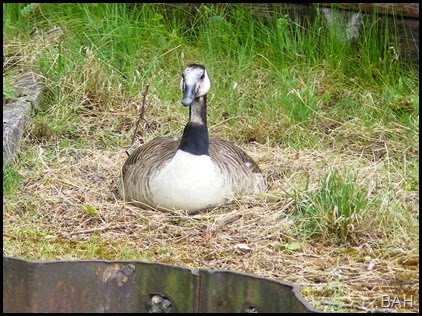 We stopped opposite Middleport Potteries pottery entrance. We were too late to go on a factory tour and as it was Friday they only do the one in the morning, so we had to make do with the 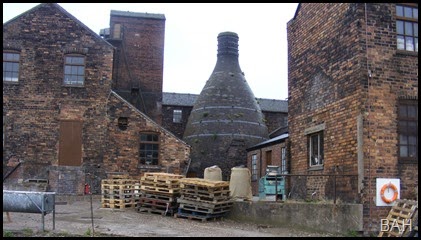 Visitor Centre. My word it was free, if it had been a fiver it would have been good value. One of the volunteers, Mark, latched on to us and he was a fountain of knowledge. After going into detail about everything in the three rooms he directed us to the cafe where we enjoyed lunch, Staffordshire Oatcakes. Once that was out of the way we left by the canal side doors to look at mooring 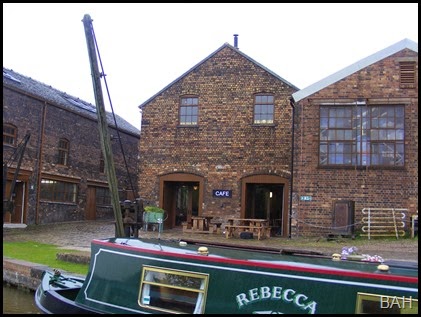 possibilities and noticed Mark going into the cafe so we didn’t disturb him, he had told us to catch up with him later as he had more to show us. We wandered to the remaining Kiln and some of the artists who hire studios there before returning to reception to hunt him down. What a treat he had in store as he picked up the keys to the mould store and took us in there. They still have over a hundred years of plaster moulds in store covering every item made including the plaster original so they can even make new moulds as required. It was 3 pm when we left and 11 am when we arrived and that was without a factory tour. A great half day out.

While we were there it started to rain, not heavily but enough to make me decide to put a coat on before we set off and a good job to, as it wasn’t long before it was chucking it down. We made a brief stop at Longport Wharf to fill with diesel at 78p/Lt it would have been 75p if I could have taken 100 lts or more. and then set off for Harecastle Tunnel, we weren’t sure if we would get there in time, but as we pulled into the moorings the tunnel keeper came out and said we were just in time for the last passage of the day by minutes, it must have been about two minutes to four. He gave us a quick safety briefing and sent us on our way, the only boat in the tunnel, I have never been through alone before always in a convoy. I was pleased to see the skeleton is still in the alcove near the north end.

For those that don’t know Harecastle tunnel is controlled by two tunnel keepers, one at each end in phone contact with each other. As the tunnel is only narrow bore and nearly 3000 yards long, boats can’t pass in it so it is one way operation. Also it has no ventilation shafts so after you enter the south end they close a door behind you and start large extractor fans to draw fresh air in from the north end and drag the engine fumes out of the south. Normally boats go trough in convoys of up to about 6 in each direction, As you leave the tunnel the keeper checks you 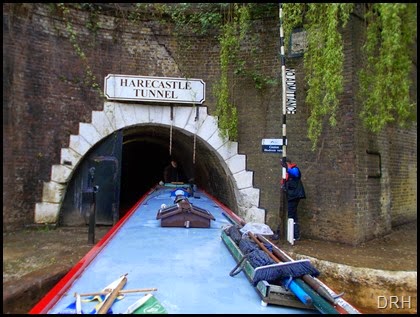 out and once the last boat of the convoy is out he sends the other convoy in. The journey through the tunnel can take between ½ a hour and a hour depending on how fast the boat travels, in our case it took us 36 minutes and the keepers were praying we wouldn’t be one of the slow ones going at tick over as they can’t lock up and leave off work until the last boat is out.

Once clear of the tunnel the water is a rich orange colour, there is talk of trying to clean this to comply with the water framework directive but I feel this will remove some of the character of the 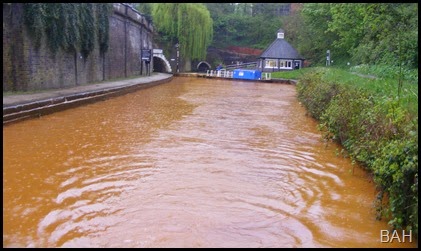 canal. As you can see it is still raining hard, we dropped down one lock of what is now known Heartbreak Hill a flight of 26 locks in 7 miles, most of them are in tandem pairs to where there are mooring rings to spend the night. 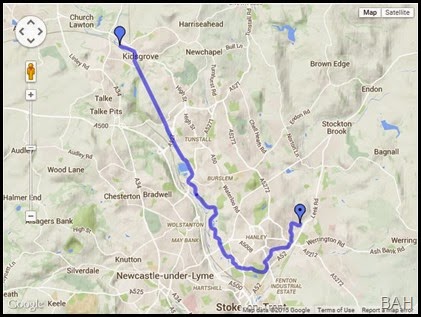 9 miles, 3 locks one a staircase, I junction 2 canals and one tunnel in 4 hours.