Its OK folks, everything is back to normal and this morning we woke to the sound of rain on the roof. Thankfully it didn’t last to long and we have not had any more.

We set off a little later than normal up through Red Bull Top Lock, the building just by the lock use to be the old Kidsgrove Gas Light company. 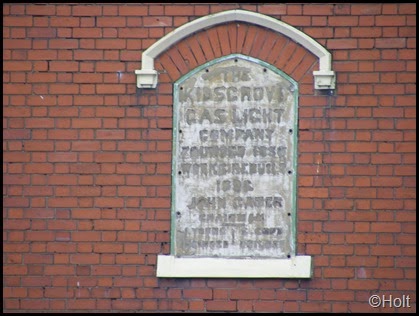 On the other side of the lock is the Bluebell Public House with the relief sign on the wall which could do with a lick of paint. 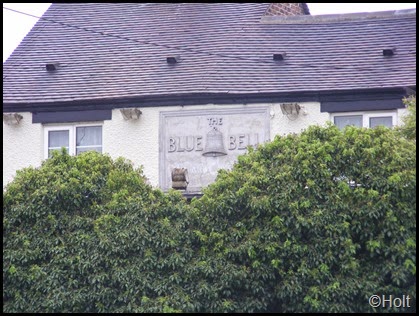 After this its hard right, I am not sure you would actually get a 70 footer round here and onto the Hall Green Branch which doubles back on its self, so we are now heading back the way we  came passed what use to be Pipers boat building yard and another hard right over the Pool Lane Lock aqueduct, 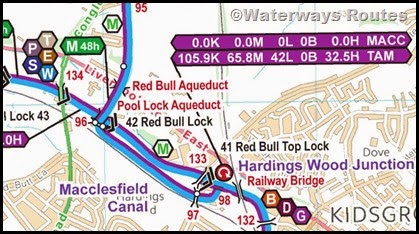 This can bee seen quite clearly on this screen shot from the route planner I use produced by Waterway Routes. Looking over the aqueduct to the right you can see the locks that we came up 20 minutes earlier. 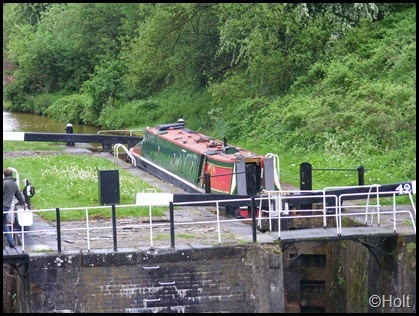 There are some very nice 48hr moorings just over the aqueduct but they are a bit close to the railway. It was just up here that we passed nb. Shelley Anne the home of “Baddie the Pirate LEDs” a quick blast on the horn brought Sarah-May out with the offer of a brew, but as we were already running late and had mugs in hand we declined this time, maybe we will see her on the way back.

The first lock we came to is quite interesting, its  lock No.13 Hall Green Lock, its only a shallow lock and is classed as a stop lock to prevent the Trent and Mersey water being lost to the Macclesfield Canal but has a very long narrow lead in to it. I understand that the lock was once twice the length it is today so that it could be used by two full length Narrowboats at the same time, ie. Motor and Butty. 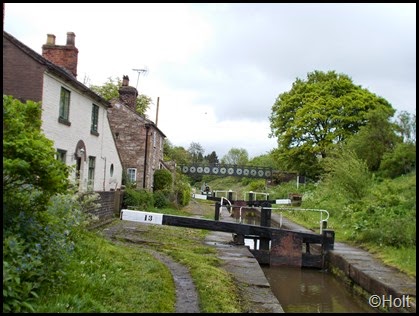 On the wall of the cottage is a box containing information leaflets produced by the Macclesfield Canal Society about the Macclesfield Canal, it history and in modern times as well as a map of the navigation. There is a water point just above the lock so we stopped to fill with water, while Diana took care of that I removed several lengths of different cord and line from round the prop. Once full of water we made much better progress. (or was it the removal of bits from the prop) We continued on passed Ramsdell Hall owned by Keith Humphries, director of Stoke City Football Club.(this information came from HERE) This apparently is the back view. 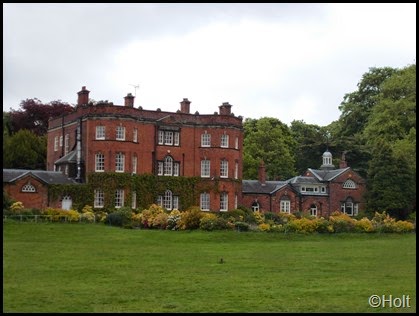 We moored almost opposite Ramsdell hall at bridge 86 and after lunch walked the mile to Little Morton Hall a fine Tudor Manor House now owned by The National Trust. We arrived just in time to join a conducted tour of the ground floor before wandering around the rest of the Hall and grounds. 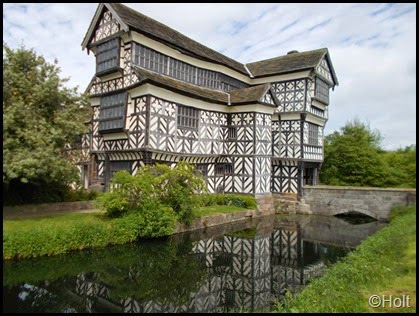 Returning to the boat we set off again for another couple of hours cruising in the very pleasant afternoon sunshine. Last time we were this way, about 15 years ago this was an old warehouse on the canal bank in Congleton, today it has been tidied up and converted to flats, much better than just being left to decay. 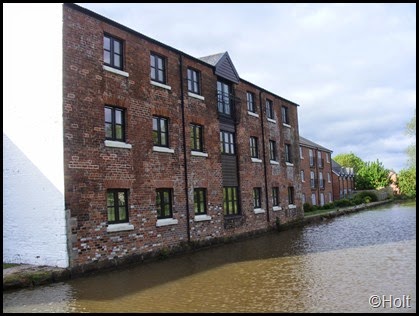 On thing this canal is known for is its rather splendid mile stones, they are rather quite substantial standing a good 2’ 6” high and planted into the side of the towpath ready to catch the unwary cyclist as they wiz along head down. It is said that with the outbreak of war these were all buried so they couldn’t be of any help to an invading army. 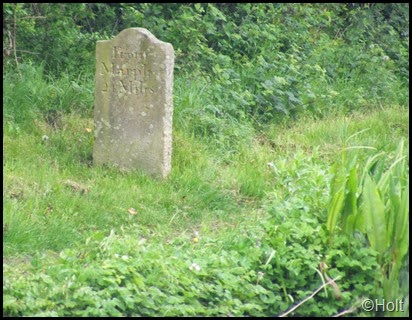 One thing I must say is that some of the views from this canal are quite fantastic looking out across the valleys. I wouldn’t like to try to guess the value of the property in this photograph. 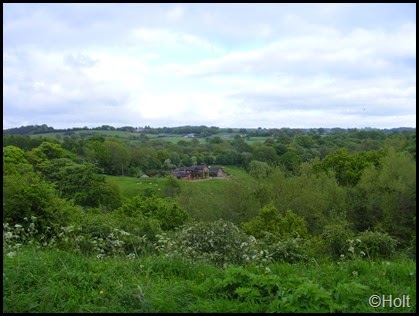 We finally moored for the night at quarter to seven this evening when the sun was going down, well we had taken 3 hours off during the middle of the day. We are just passed Galleys Bridge No.70 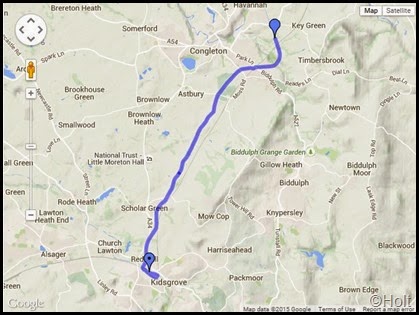 I read somewhere that the reason why Hall Green Lock is so long is because the Macclesfield and the Trent and Mersey owners both built a stop lock - end-on to each other.
I couldn't see why they would do this unless neither of them trusted the other to keep their locks in order.

I used Google Earth to measure the junction. I reckon a 72ft boat would just turn, but it would be close.

I used Google Earth to measure the junction, and I reckon a 72ft boat would just turn here.