This morning we were strimmed, its the first time its ever happened to us, the grass cutting gang worked their way down the moorings, yes there was grass along the blacking but a wet broom soon got rid of it and what is the alternative, don’t cut the grass at the visitor moorings?
Leaving at our normal time we seemed to meet loads of boats coming towards us. The weather wasn’t too bad but could have been a tad warmer.

We passed a chap repainting the black on the side of his hull, he had moored on a weir which was about 2” above the water and was standing down inside the weir so that his gunwale was just about at chest height. 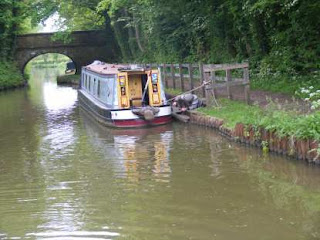 On this section of canal they have not used fence posts at the back of the tow path but fence stones, can you imagine the work involved, shaping each stone, cutting two holes through for the rails, transporting them all down the tow path and then setting them in the ground every 6 feet, but of course they only had to do it once. Why some have been whitened I don’t know. 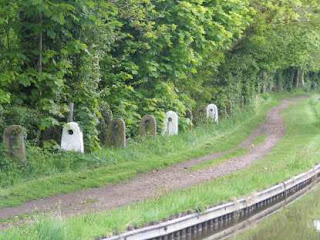 I just happened to notice that a bend on the canal put us straight in line with the electricity pylons. 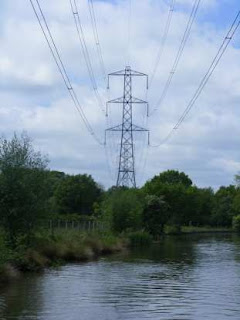 At Higher Poynton the canal broadens out into another wide flash, but like so many, stray to far over and you will be high and dry as the water is very shallow, in this case there are a row of posts to remind you where you should be. 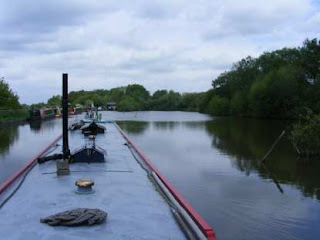 Its strange up we were now in entering the land of quite large marinas, we had not seen any at all for some time and now we have Lyme View Marina, Braidbar Boats, New Mills Marina and Furness Vale Marina all within a few miles of each other.
After passing another fine mill at Marple, The GOYT Mill we stopped for water just before the junction with the Peak Forest Canal, 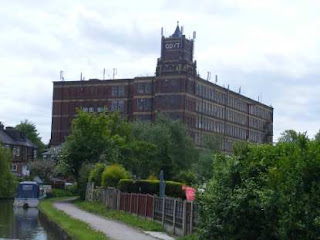 I must say this is not the fastest tap on the system and as it is right at one end of the moorings we had to use both our hoses to reach it. A cup of tea and a few odds and ends later we were full and set off the 50 yards or so to the junction where we turned sharp right  on The Peak Forest canal,I will never complain about the state of the Oxford canal again, we virtually stopped at every bridge hole as the boat formed a well fitting plug and selecting reverse dragged all the rubbish off the bottom. We had, of should have had two lift bridges and two swing bridges to contend with, but Woodend Lift bridge has been removed, I am not sure if this is permanent or for overhaul. One good thing about these bridges is that there is a mooring bollard on the offside which is very useful for single handed boaters as most bridges you have to cross from the tow path to the off side to operate. 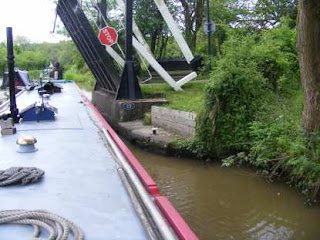 Not long after this it started raining, very light at first but then good heavy steady rain, probably for the final hour. Our destination for tonight was Bugsworth Basin and we were hoping there would be room for us as it can be a popular spot, probably more so at the weekend, but tonight there are probably 18 of us moored here at the moment. The basin consists of several arms and bends so you keep finding boats and spaces as you walk around.  After the rain finally stopped we went for a quick walk round and there is a very nice 3D model of the basin and old lime kilns showing how it use to be. 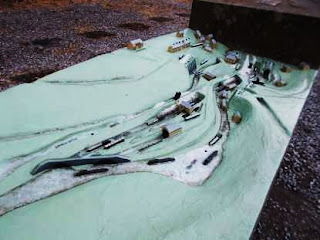 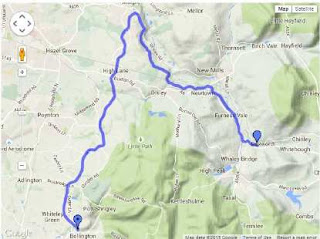 I believe the holes in the stone fence posts was a variation on recycling. Old cables from mine cages were replaced at regular intervals for safety reasons - and how do you dispose of a mile or so of steel cable? You sell it (or even give it) to the local council or other organisation (like the owners of the Macclesfield Canal), who thread it through holes in stones and make it into a fence.