We arrived at the marina yesterday evening at about 6-30 pm. It had been a good drive from Norwich with no holdups on the way, we only encounter rain for the last 5 miles so all in all it was quite pleasant.

It was defiantly cool onboard when we arrive and despite firing up the stove it didn’t warm up that much before bed time, so the electric blanket was put to good use.

We decided that we would eat out, going by car. The first choice being The Olde Peculiar pub at Handsacre, however they were fully booked with at least an hours wait for food so we moved on to Armitage and The Spode House, we have never been her before and we weren't going tonight, They had a tribute “Tina Turner” singer on so again sold out. We ended up at the Plumb Pudding again to enjoy a very nice Lobster Risotto before heading back to the marina for the night.
It started raining again just as we went to bed and I think it rained all night until about 8am this morning with almost ½” falling in about 10 hours. Although the boat was still cool last night we were fine in bed and this morning not only had the stove warmed the boat we also had a tank of hot water for shows.
I had a couple of small jobs to do before we were ready to leave and we also needed to visit the office to tell them that we had now left our berth and would be moving on the the new one when we returned. In addition to this we left a few books in the well stocked library.
The goose is still nesting in the flower box at the end of the service pontoon, I don’t know if she has eggs or not as last time we were here she kept moving off. As you can see a busy spot to try and raise a family. 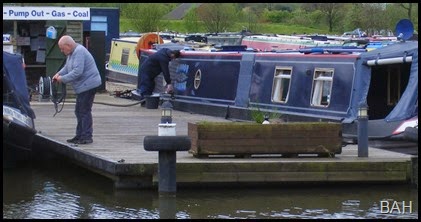 We finally left the marina at 11am having to wait in the exit while a boat went by before we could head north towards Rugeley. The local farmer seems to have a very good crop of stones this , I don’t know how good the market is for them.

We met a couple of our fellow diners from last night as they headed south, a clear run through Armitage Tunnel. They advise that you send someone ahead on foot to make sure the channel is clear, but providing you enter the bridge slowly in case you have to back out you can soon see the length of the channel and if there is anyone already in there you just have to back up a couple of boat lengths.

We stopped at Rugeley for a bit of shopping as due to us not coming straight from home to the boat yesterday there were some food stuffs required. With the shopping done we were on the move again, It was good to note that most of the boats that had passed us were tied up so we wouldn’t be behind them at Colwich lock. Crossing the aqueduct there were 3 boats moored 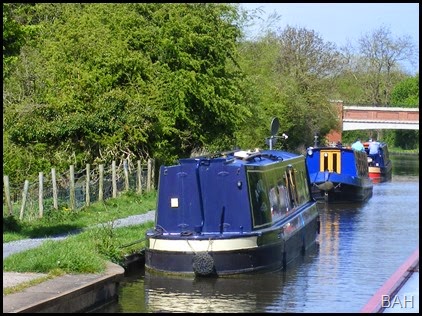 on the 48 hr moorings that were put in by the local IWA and now the path is topped out and the grass re-growing they look quite good. One of the boats was the “City of Durham No 92” and the steerer past flattering comments on my blog.

The ornamental giant rhubarb is growing well and looks as if it will be as spectacular as ever in a couple of weeks time. 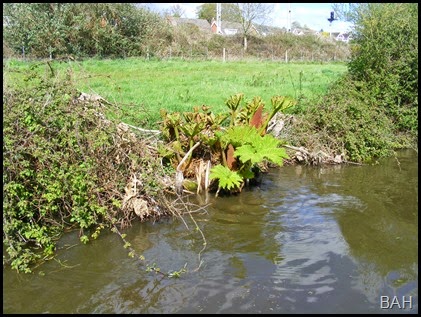 By now we were meeting boats quite regularly which was a good sign and we approached Colwich lock just as a boat crewed by 3 ladies was about to leave, I did worry about the last lady getting back onboard as they exited under the bridge. There was a second boat waiting to come down so they helped Diana work the lock, similarly at Gt Haywood lock a boat had just left the lock and closed the gates as we reached the end of the lock moorings, even in such a short space of time Diana had to draw the paddles to open the bottom gates.
Above the locks the moorings were looking pretty full and we considered going to Tixal for the night but looking ahead with the binoculars I was fairly sure I could get in just through bridge 74 opposite the garden centre, when we did get there there was room at each end of the mooring for us, so we pulled over at the far end, furthest from the road and with the garden centre cafe between us and the railway. (I think I many also be using their WiFi) 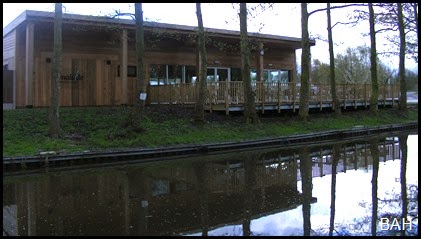 Its been a good days boating, sunny and warm, no rain and not much wind, since we have been moored boats have still been going passed us heading south and more importantly the barometer is climbing, so tomorrow should be even better. 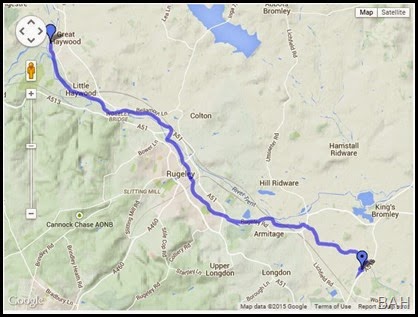