The boats were going by from 7 am this morning and when we did get up we found we were in the middle of a fishing match.

We shoved off at ten to ten and arrived at Hassall Green top lock just as a single as a boat was about to come out. As we dropped down another boat approached and the lady said they had left the gates for us, I pointed out that the single hander ahead was just going into it. “no” she said, “there are two and we have left the other one for you”

Looking round the poor old Romping Donkey even looks sad from this side. 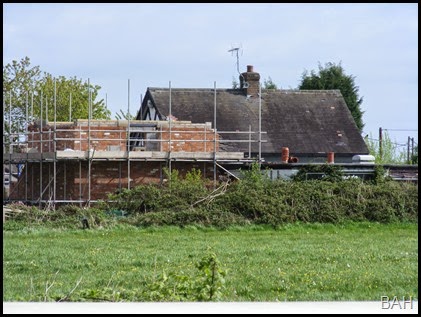 By the time we reached Hassall green Bottom Lock the single hander was on his way and a hire boat was coming up in his place, it was good to be clear of the motorway.

At the next pair the single hander had drawn all top paddles and waved us across to the off side one which he opened as we arrived. The reason that was ready first was that the last boat had left the bottom paddle up a couple of notches on the near side one, once dropped he was soon heading into the lock alongside us. Being ahead we returned the complement at the next locks and even drawing a paddle on the singles. 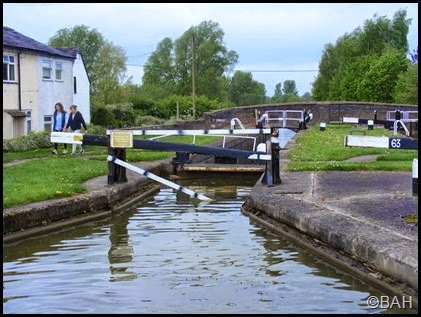 The reason one of them is single is because the nearside is out of use and doesn’t look as if its likely to be put back in use.  The notice on the bottom gate balance beams says its a narrow chamber, maybe CRT got fed up hauling boats out of it. The annoying thing is that when approaching from the north it looks serviceable with the gates wide open. If I was coming up I would sail straight into the narrow chamber. Maybe a no entry sign at the other end would help. In case you are wondering about the yellow notice to the left of the lock well its here. 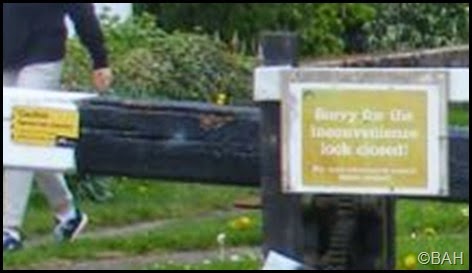 If they were sorry they would do something about it. You can just see the narrow chamber notice to the very left of the photo.

We stopped on the 48 hr visitor moorings at Wheelock and went for Sunday Lunch at the Cheshire Cheese, it looks to be the only pub open in Wheelock now. Once we were full we moved the boat along to the water point where two boats were about to leave and filled the water tank before setting off once more towards Middlewich. Once you reach Booth Lane Middle Lock you have the A553 running right beside the canal all the way into Middlewich. Below Rumps Lock two women were putting piles of corn for the birds along the concrete edging. Just below the lock are some mooring rings and bit of a bank between the canal and the road, we did consider stopping here until we saw the size of the rat eating one of the piles of corn beside the mooring ring.

As most will know Middlewich is famous for its salt industry. We noticed lots of industrial buildings have been demolished over recent years and this one now stands alone. 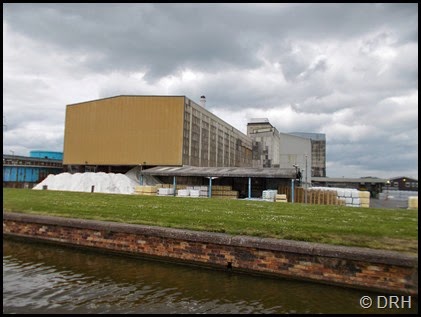 A hire boat coming out of the Middlewich Branch only had two settings on his engine control, full forwards and full astern, once he got round he didn’t half hit the towpath. We crept passed all the moored boat at Middlewich Narrowboats and arrived at Middlewich Top Lock behind a hire boat. The lady didn’t seem to have much idea what she was doing and Diana helped her, they were trying a fortnights hire to see whether to buy a boat to live on. It was lucky we were there as while Diana worked the lock she went ahead to set the middle lock, but from where I was I could see someone had left the bottom paddle fully up, so Diana trotted off down there while I locked the chap out. At the bottom lock she was unable to lift the paddles and I really don’t think her husband appreciated how she was struggling to cope with the physical effort required for locking. She told Diana that she had not been well and I don’t think she will get much recuperation on this holiday. Below the lock we bid them farewell and wished them luck, it was almost 6 pm and they were doing another hour. We moored on the rings a short way before Big Lock for the night. 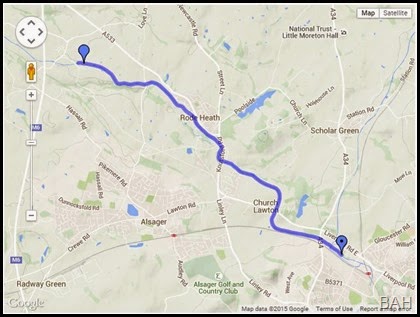