Well we didn’t feel any boats go by yesterday after mooring or this morning and the pins were still tight, not only that but we were still 6” from the bank hard on the mud. This morning at our normal 10 am I untied and pulled both pins, just then Bullfinch who we had followed through the tunnels yesterday came by, so with bit of a push the bow was on the way out, he then told me there was a boat following and by the time I walked to the stern there he was. He slowed just as he got to me but I waved him on and with a gentle push the stern was out as well. That was a lot easier than I had expected.

We had a little convoy going meeting boats coming the other way, eventually the second boat passed Bullfinch who only travels slowly so it just left the two of us.

We passed these old rail heads on the off side, apparently they 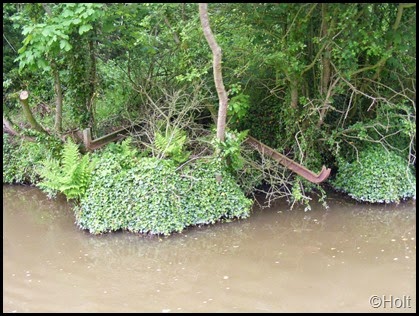 were to transport clay from the clay pits when they puddled the canal, there is a nice restored set a little further along at Bramble Cuttings, this is a very nice offside 48 hour mooring produced and maintained by the Broken Cross boat club 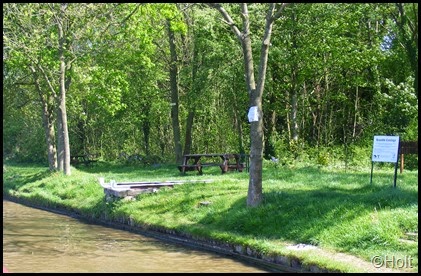 Yesterday we passed two flashes caused when the ground subsided, we were to pass one more today, it use to be possible to turn round here and it says so in some of the guide books but in recent years things have changed and boats have ended up hard aground requiring winching out again, today there is a row of posts across and someone has set willow whips against them, 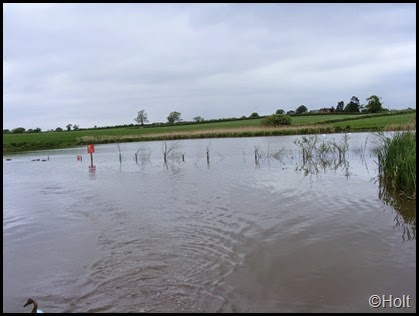 some are growing but some have died . I expect in years to come with the willow roots holding the silt a bank will form between the canal and the flash.

We were gently ticking along in the sunshine, due to meeting boats at bridges and passing moored boats we lost sight of the others, then approaching Croxton Aqueduct a woman waved madly at me. She was indicating a boat was on the aqueduct which is only single file. By the time he was almost over a second was waiting at the other side and then followed just as the first was clearing, before the second was across a third appeared and followed the others, as soon as he was clear my bows were in and we were crossing, anyone else coming could wait. Just like the flashes where cased by subsidence the same is happening to the canal bank in other places, this piece just below Middlewich is only just  above the water level, which is a little bit low today.

At Middlewich Big Lock, so called because it is wide enough for two narrow boats, the only on this end of the Trent and Mersey canal, the two boats we were following sat waiting to go up. With the number of boats coming the other way I expected at least one of them to have gone, so we had to wait and turn the lock behind them. As we were leaving a boat was coming the other way so we left the gate for them, but they still pulled over and stopped at the lock moorings. The next three locks had a pair of volunteer lock keepers on them and as we locked up the first, they set the second and then the top for us.

Kings Lock Chandlery  they have a wheel barrow in the same colour as the engines they sell, its even badged the same. 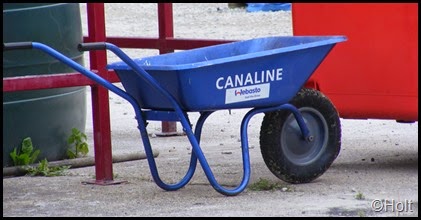 All the locks up of Middlewich were with us except the last one. By Rumps lock the Kinderton pub is being refurbished, whether it will reopen as a pub or a private house I don't know.

As we came through Sandbach it started to rain but it didn’t come to anything. Our planned mooring was the visitor moorings at Wheelock but when we reached the service point we could see they were all full, so backwards through the bridge and moored opposite the houses, which means I can get a BT WiFi hot spot. 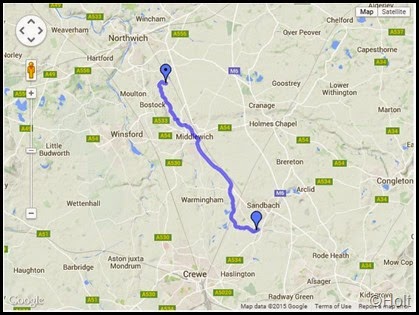