The wind picked up overnight and the centre ropes slapping on the back of the cabin became annoying so at 2am this morning the rear doors were opened and the offending ropes moved. Surprisingly we heard nothing of the trains overnight or this morning and the track is level with the towpath.

This morning started very dull and never really got going. We made a move at twenty past ten heading for Pontcysyllte Aqueduct, this is what it looks like as you approach it. 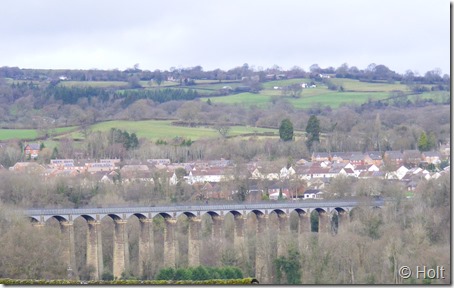 We met a single boat just before the aqueduct and then nothing so we had a clear run. There are no pictures as we cross because the wind was now gusting at over 30MPH and I was holding the tiller with one hand and anything that fancied blowing away with the other. The wind was coming straight down the valley pinning us to the walkway.

At the far end in Trevor Basin Anglo Welsh had all their boats neatly moored for the winter, I understand there are some visitor 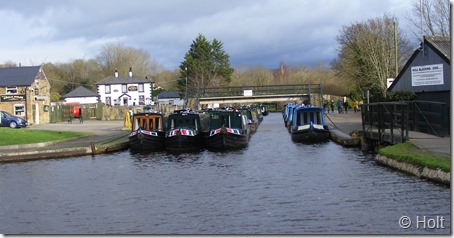 moorings at the far end of the basin so we may investigate on our way back.

I always manage to hit the bottom as I come to the end of the concrete section of the canal just before the end of the first one way section, I almost get the feeling its getting worse and its not mud.

I thought I would include this photo as it plays with the eyes a bit. 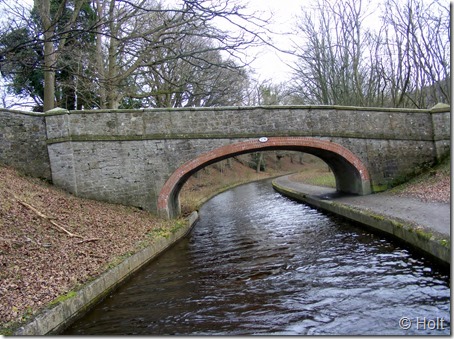 As we came to the one way section just after The Sun at Trevor Diana said she wouldn't bother walking ahead, what are the chances of meeting anyone, which was fair enough, also once you have done about 30 yards you can see to the far bend and we didn't meet anyone, however at bridge 43W I was just lining up for it when I spotted the bows of the trip boat coming the other way so held back, good job he didn't leave 5 minutes earlier.

We carried on to just before LLandyn Lift bridge No.44W where we will spend Christmas, people suggested going into the basin at Llangollen for Christmas, but why sit in a basin surrounded by other boats when you cam look out the window and see this. 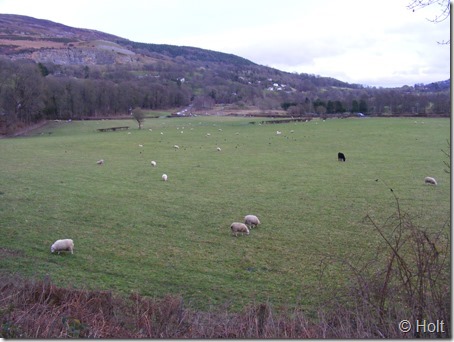 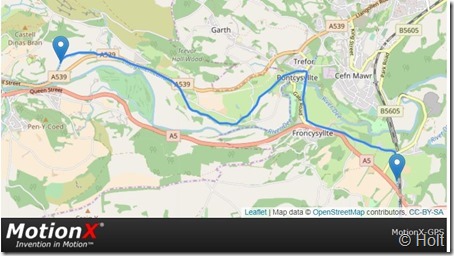 5 miles in 2½ hours with no locks. We could have done it a bit faster but then the batteries wouldn't have been so well charged.

Posted by Brian and Diana on NB Harnser http://nbharnser.blogspot.com at 17:01