Not so cold last night so no ice to take even more blacking off today. We set off at twenty to eleven as we didn't have far to go, just to the visitor moorings at Red Bull services. It was bit of a coincidence actually as the journey was 1.17 mile and it took us 1hr 17 minutes.

A quick shot from the top of the aqueduct looking north down the Cheshire Locks on the Trent and Mersey canal, the sky is not quite so bright today. 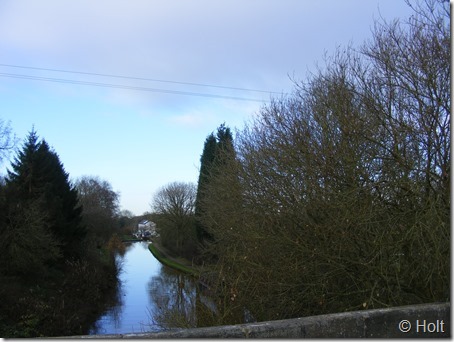 We were delayed slightly as we left the end of the aqueduct on the right angle bend, there was a CRT tug there waiting for a boat coming the other way to pass all the moored boats so we had to tuck well over to allow him to get round the bend and cross the aqueduct before we could follow the CRT tug back to the Trent and Mersey canal at Hardings Wood Junction. We both turned north and down the Cheshire Locks, only he had the locks filled ready for him from the boat coming up.

There is a finger post on the junction that was erected to commemorate the thirtieth anniversary of the restoration. I still think that was the best Logo that The IWA ever had. 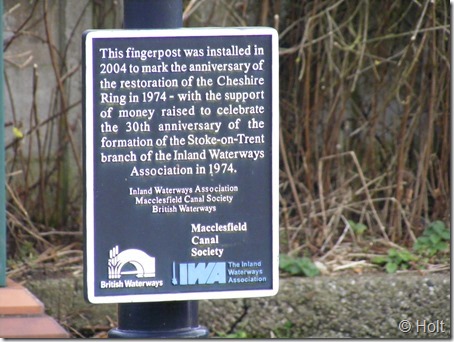 The piling along this section of the Trent and Mersey Canal has rotted all the way along the water line, I wonder if it will all collapse in one go, or if the underwater section is the bit doing the work holding the bank up. 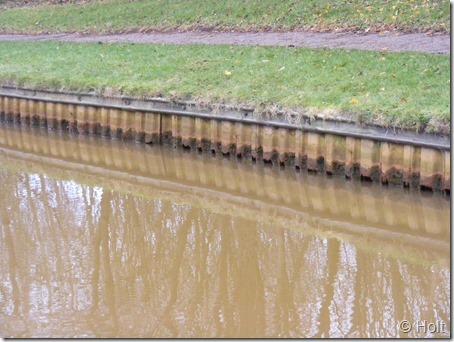 We stopped just north of the aqueduct as there were a couple of spare mooring rings on the towpath but we could only use the stern one, nothing at the bow. Rather than drive a pin in I walked down and checked out the visitor moorings by the CRT Red Bull offices and found a good 80 foot of space, so that will do us. Wandered back up to Harnser and we dropped down through Red Bull lock to moor for the night with a ring at each end.

You will see from the map that we have done the 270° ring again first crossing the Trent and Mersey and then ducking under the link to the Macclesfield canal. 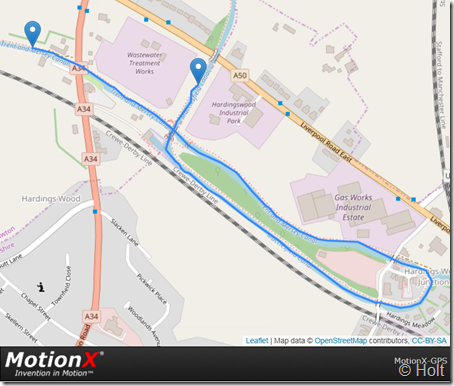 Posted by Brian and Diana on NB Harnser http://nbharnser.blogspot.com at 14:57