Well guess what, it rained again last night but had cleared up before we set off, it was also a good deal warmer but over the course of the day the wind picked up. This resulted in my cap sailing away as we passed the entrance to Swanley Marina.

Before we set off this morning I had to do a bit of maintenance on the stove. It wouldn't come up to temperature last night so this morning after breakfast I shut it down and cleaned the burn, I can't remember when I did it last, before diesel became low sulphur it was a regular requirement.

We didn't see much about this morning and the only interaction we had with anyone was when the chap with his barrow had to wait for us at Frith Lift Bridge, 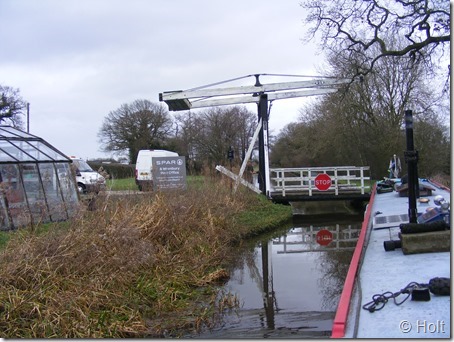 but he didn't seam bothered by the short wait. We were to see him again in his truck at Wrenbury lift bridge, where Diana waited for him before closing the road to lift the bridge. Once through the bridge we were to meet several boats, one we knew and we met them at a bridge hole. Having met three boats we were quite surprised to find Baddiley Locks against us as we hadn't seen a boat ahead of us at all.

We actually pulled over for lunch between Baddiley and Swanley Locks as we decided that with the wind it would be impossible to eat soup on the move. As it turned out we pulled in behind the boat we had been following and as they were away before us the Swanley locks were also against us.

As I said my cap blew off passing the marina entrance but luckily it landed like a boat and I had recently waterproofed it so it floated against the towpath where Diana was able to rescue it for me. We carried on through the bridge to moor for the night a short way before Platt's Bridge, It was well dark when we felt the boat move and thought a boat had just slid past, but actually it was the surge from one coming through Platt's bridge with his tunnel light on, he has moored for the night between us and the bridge. I was quite surprised to feel the surge so early. 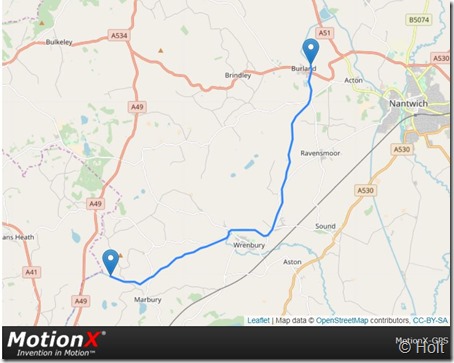 Hi. Did you notice any farmers field or crt long term moorings around Wrenbury? We're going up there at the weekend now that Hurleston locks are open again. And we'd like to stay somewhere with a station until the spring. Enjoying your blog, shame we just missed you in Barbury junction,

Trying hard to remember but there may be some here https://drive.google.com/open?id=1dAvYnDVIbltwacGs7keOsjbIapgZyX0x&usp=sharing