We set off at 9AM this morning in a fine drizzle, our target being Great Haywood to swap Grandsons out. Came out of the junction onto the T&M to take water, while it was filling I looked for a mooring. Luckily I bumped into the secretary of the Cutweb boat club who was about to leave, so we were able to swap places, it meant reversing back about 8 boat lengths but no wind or traffic.

We swapped the Grandsons over at the canal side Cafe by bridge 74 and after a coffee we set off towards Stone with Brian onboard again.
At Wychdon there has been a planning request for a new marina, it was a bit controversial as it is on the edge of a SSSI but from this notice on site, which is almost legible it looks as if it was passed, but maybe some people still object. 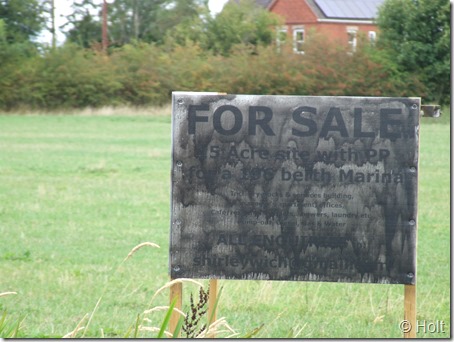 Just through bridge 80 at Western there was a boat moored towpath side, and when I say just through I mean just. any further back and he would be under the bridge, the cottage opposite has just hosted a wedding, we rather liked the marquee. 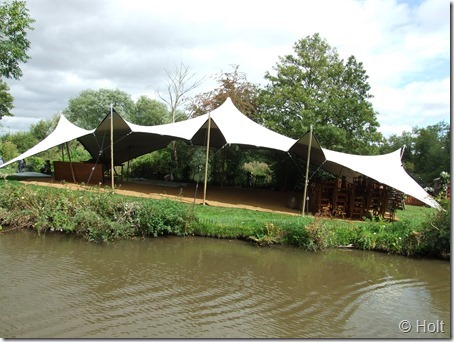 Just above Aston lock there is a steel Narrowboat moored with a small outboard engine for propulsion. 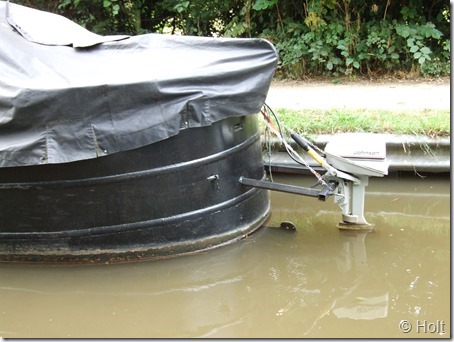 We were hoping to moor just below Star Lock at Stone, no chance, boats were moored way back opposite the houses, I sailed passed them hoping there would be a spot on the 48 hr ones, but nothing. Likewise between Star and Yard locks, although if two boats had moored more thoughtfully I would have got in by the carpark, but I couldn't be bothered to discuss it with 2 of them. Above Yard all moorings are private but a chap did say I would be OK in front of the Chandlery as they didn't open until 9AM but as we need a bit of shopping we pushed on. We finally moored in almost the same spot as we did coming down between Newcastle and Lime Kiln Locks.