Went out this morning to find the road closed, several police cars, an ambulance and two Paramedic cars on the bridge where the towpath changes sides. I had heard the sirens earlier but didn’t realise they were that close. They were there well over an hour but had gone by the time we walked round to Sainsbury's, all that was left was a fair bit of blood on the ground,but what happened I don’t have a clue.

Back after shopping we were waiting for a boat to vacate the water point, a short way behind us on the other side is a public slipway where this little beauty was launched. 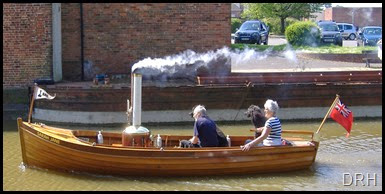 Once it was free we crossed over to the visitors centre and filled with water, while we were there this chap came by standing in a canoe and paddling with a pole. he said he thought it quite an efficient way to propel a canoe, blades on the end would give to much bit in his opinion. 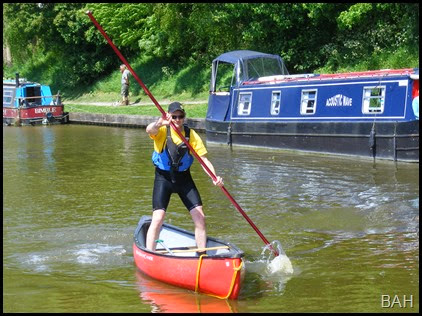 For those that have been following this journey you will recall on our way here we met the Devizes to Westminster canoe race, well this is where it all begins, right outside the visitors centre. 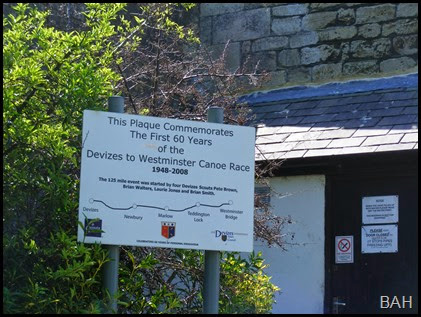 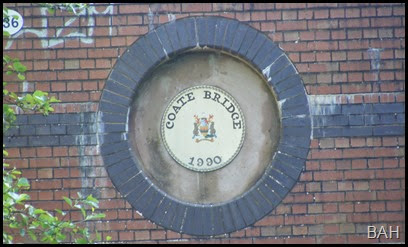 has several pairs of shoes hanging from it. When I was a boy this was due to the big boys picking on the little boys and you then had to explain to mum why you no longer had any gym shoes. My son tells me that today this is a sign used by the drug pushers to show the patch has been taken. 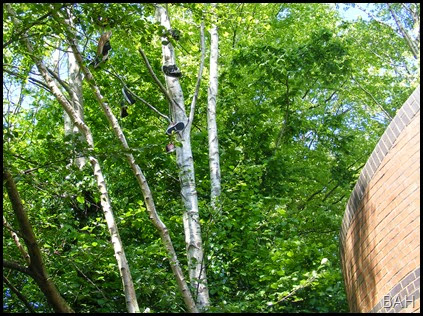 How times change, I hope you are all having a gay day. It wasn’t long before we caught up with  “Dreadnought” who had been moored in front of us last night as was in the process of overtaking the local trip boat who were on a training exercise. 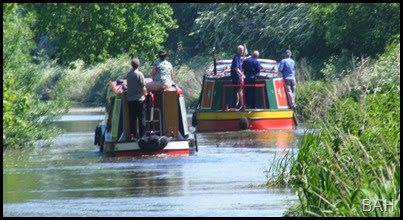 As we pulled up behind them they held well in and invited us to pass, I suspect they would be winding and heading back at the next winding hole as they have bookings this afternoon and evening.

Devizes marina looks quite a nice place if you are looking for a marina mooring. We passed lots of boats that really should be in

there, not lived on but just left moored to the bank for an indeterminate time.

At Bishops Bridge these two canoe owners really didn’t understand the sign I think, there was no sign of them, just the canoes moored to the bollards on the bridge mooring. 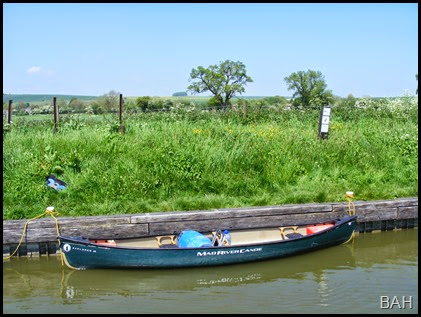 We passed the nice little steam boat, the occupants sitting under the hedge in the shade. It had such a beautiful little engine, almost like a model. “Watt” a toy. (sorry) 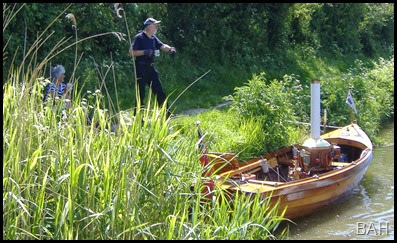 We continued on through the lovely scenery, this is really a beautiful part of England and this weather makes it all the better.

We didn’t have far to go now as we planned to moor overnight at the All Cannings 48 hr visitor moorings, as we approached it didn’t look good with three Narrowboats already there, but there was room for us behind the far end one. What I didn’t realise was that the middle one had already dropped their ropes and were about to set off, so actually there was loads of room. My task for the afternoon was to change the oil and filter. I used Wilco Classic motor oil for the first time and its a lovely shade of green, just like the old Duckhams use to be, its also one of the few API CC oils available on the high street and a lot cheaper than from the chandlers. I also checked the battery water level, all OK unlike last time I checked them and then tightened the two alternator belts.

When I had finished the boat ahead of us had left so I moved right to the end of the moorings leaving a long length of mooring for anyone arriving later,

One of those strange urban phenomena with no clear explanation it seems.

Hi,Just a thankyou for the tip about the Thames that you left on our Blog.We had a little experience of the problem shortly after leaving St'Johns Lock at Lechlade yesterday.Not our boat I must add.We've passed on your tip to our companions who will be heading South on the Thames in a month or so.We are going back onto the Oxford this week and heading North.
Thanks again,
Fred & Lisa,
NB Chyandour.