Yesterday was again without rain but today it started about 6pm and is still raining. Last night we ate at Hon Fusion the Chinese restaurant in Widcombe, We spotted it the other night and its always a good sign if some of the customers are also Chinese.

We left our mooring at 9 30 this morning, 4 of the boats that were there when we arrived were still there but we only saw a person onboard one of them when we arrived 2 days ago, other than that they had just been left using up valuable visitor moorings. We waited for a boat to come down in the next lock up and they left  the gates open for us in the lock above, however while we were locking up the volunteer lock keepers kindly closed them. We found these locks quite slow and a faulty paddle didn’t help matters. The day was quite warm and it was a pleasant but slow cruise to Bathampton. On arrival we winded, the winding hole is only suitable for 60 foot boats because they have put mooring rings opposite which reduces it width. We then dropped back to top up with water,

Our reason for coming to Bathampton was that my son was meeting us with the grandchildren and he turned up about ten minutes after us.

Once fully loaded it was back down to Bath, there was some interesting boat handling going on at Bath Narrowboats and I never did work out what he was trying to do, nether did the guy who was just hoping to get a pump out. We decided to carry on down the locks, this included Bath Deep Lock which the kids 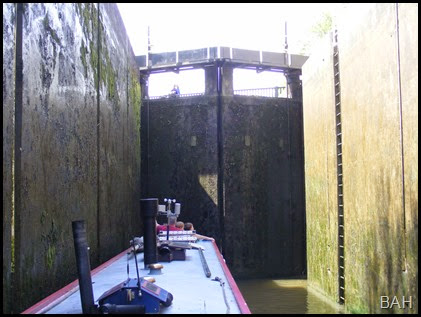 enjoyed, this time we were assisted by the volunteers and go up the Avon to the weir and then return to the canal to stop for lunch. 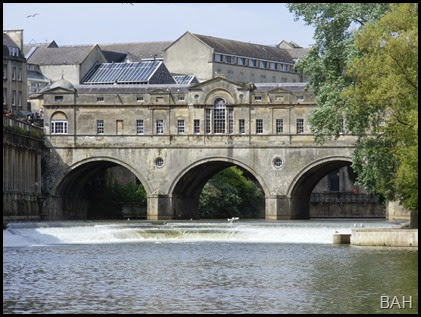 However at the railings below the weir all the no mooring signs had been covered up. A chap on a bike said it was fine to moor there and even asked if I needed a hand. I mentioned the no mooring to which he replied its complicated and that he was happy to give me permission to moor and then cycled off. After mooring to the railings we all trooped into the Italian restaurant near by where the service left quite a bit to be desired with over an hours wait for starters. Eventually after lunch we were off again and headed back up the locks. We had a problem at lock 11 as the gates didn’t close tight, I eventually managed to pull a single mattress up from the bed of the canal that was between the gates. I think we would have struggled to get it out of the water if my son had not been there. Passing Bath Narrowboats there was again one of their boats doing strange thing, but this time he had a good excuse, the boat was permanently in reverse gear and went hard aground backwards right across the canal. It took two of us pulling from the towpath and the steerer pushing with a pole to get  it free. We then continued back to The George at Bathampton where we had dinner before saying goodbye to the family. I must say their service was much better. 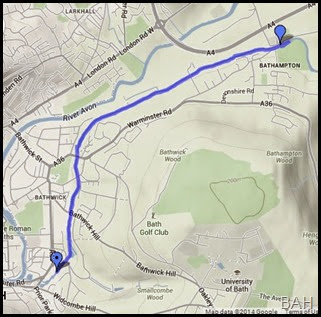 Great blog Brian been following for a while now, since the Dukes Cut I think. RE The George at Bathampton funny how different days people find things the opposite.
We called in last Tuesday for lunch and the food was awful my wife's peas were cold I.e. Not cooked and my steak and pulled pork burger was far from great! We hardly ever complain or return food we did that day!
Enjoying your cruise along the K&A that'll be us in September all be it on a hire boat.
Cheers
Ade

The chap behind the bar did hint that I may not have been as pleased with the service had I been there lunch time. They are advertising for 12 extra summer staff.