Our two nights mooring at Bristol are up so today we had to be clear of Netham Lock by 7pm, As the first available place to moor is an hour upstream we decided that we would depart at 4pm so we could hopefully moor at Hanham on CaRT waters at 6pm.

Prior to departure I wanted to cruise round the floating Harbour and as my son, Grandson and friend came over for the day they looked forward to a cruise as well.

We reversed out of the mooring at about 3pm just as a ferry came by, well it had to happen as they run round the Floating Harbour continuously all day, often meeting another ferry right by where we were moored. Once out into the open harbour backwards turning was the first problem, the wind was gusting at over 40mph straight along the harbour west to east. Once round we made our way west, I would have liked to have gone into Cumberland Basin but was not sure we would have cleared the bridge with our chimney up, and I didn’t want Diana shuffling down the wet gunwales' to remove it in those conditions, also I couldn’t see how much space was in there and turning through 90° in this wind was interesting and needed some space. So we gave that a miss and just went round the edge of the main harbour, we will do it next time we visit. You can see by the way the flags are flying on the SS Great Briton just how windy it was. 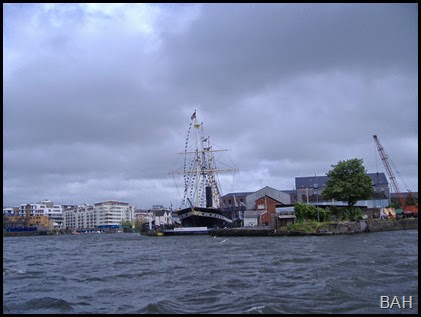 We dropped back onto our moorings for our guests to leave, while we were there this ex working, or you could say still working Narrowboat, Redshank, came by. It was a bit more sheltered in St Augustine’s reach where we were moored. 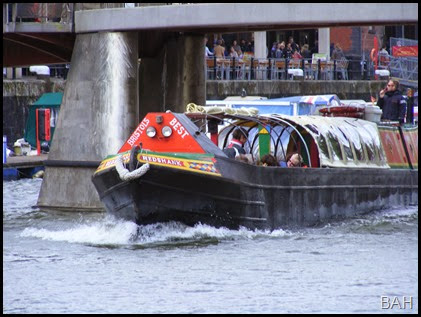 After our guests Departed it was our turn to leave, again reversing out into the Harbour but this time there was a bigger trip boat reversing by, we were well clear of each other and he wanted to go down where I had just come out from, so it worked well.

I like what Bristol has done with its water side development, saving what it can and reusing them, 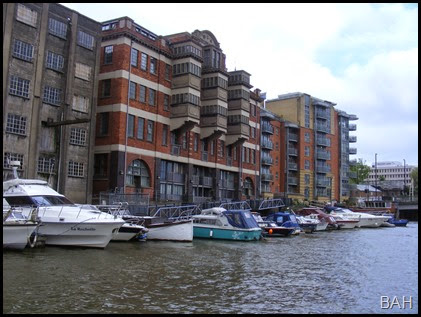 but in other places building new, modern but not out of place buildings. As you can see there is still room to develop more old unused buildings. 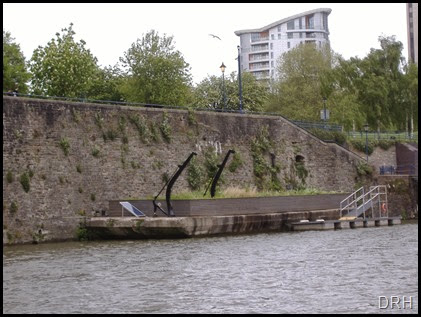 concrete grain barge, I don’t know why they just didn’t do a garden on the bank.

There is a disused lock at the end of the harbour where it joins the feeder canal, this is as Totterdown lock . 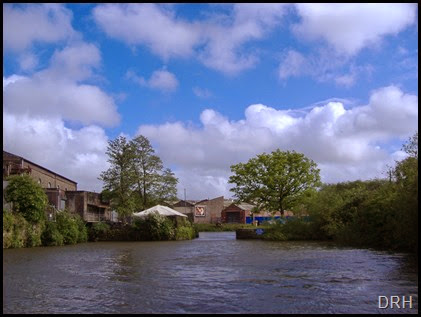 Just out side the lock at the very end of the almost straight feeder canal is Totterdown Basin with the lock running at right angles out of the side of it. Lucky for these tent dwellers it was a bit more sheltered up here. 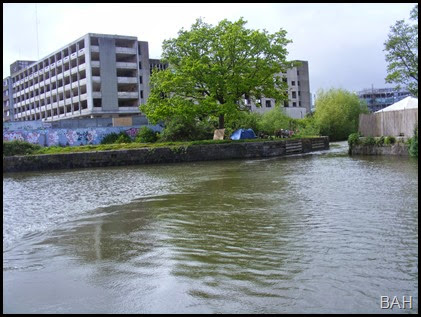 The feeder canal is a mile long and almost straight from Totterdown Basin and one end to Netham Lock at the other.
Bristol is famous for among other things Wallis and Grommet, you find they pop up everywhere, the front of ferry boats and it this case on a roof half way along the Feeder canal. 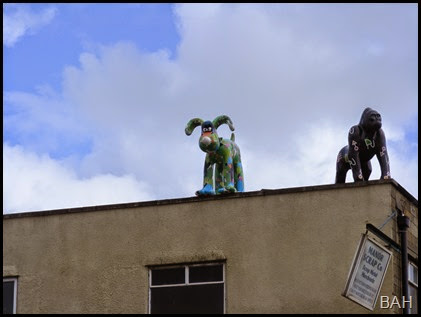 Note the way the scrap merchant’s sign is blowing.

Just as we approached the lock a cruised came in off the river and stopped to buy his Bristol licence. 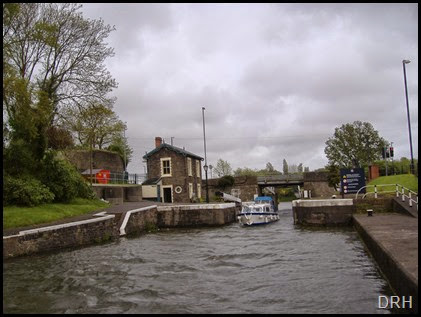 It was only a few minutes latter that we waved goodbye to the lock keeper and headed back up the river a bit slower than we had come down, The wind was sometimes behind us and sometime we were sheltered from it but there were several fresh leafy branches floating down towards us. Just beyond the old Waterworks we met the trip boat “Flower of Bristol” had we been a few minutes earlier we would have met right on the bend and as you can see he wanted most of it slewing round with the flow. 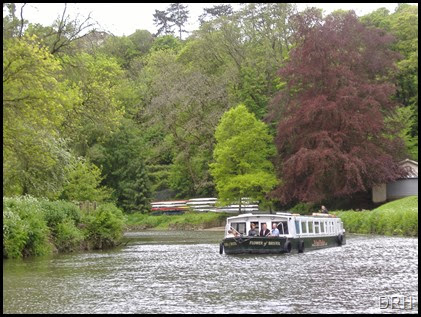 In the background are the boats from the rowing club.

A little further upstream on the right hand bank is the famous Beese’s Riverside Bar and tea rooms. This is on the site of the oldest crossing of the river by ferry and they still run a ferry to transport their customers across the river. 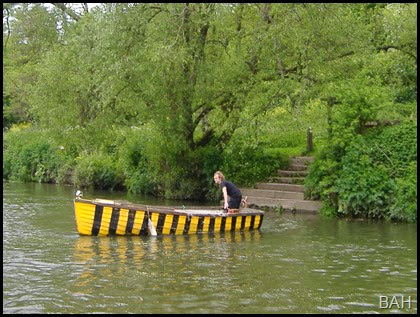 Just two hours after leaving our mooring in Bristol Floating Harbour we were once again moored on the 48 hr visitor moorings an Hanham. I do hope tonight is quieter that a Friday night in Bristol. 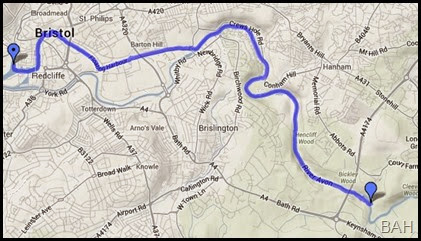