Bit of a disturbed night last night, the boat behind us that had plonked its self right in the centre of the moorings in front of the water point so using two spaces up, had its crew return from the pub and start their on deck petrol generator up, it was still running a 3 am. this morning.

We set off at 9 45 am as hire boat came up the lock behind us and we shared with them all the way to Crofton Pumping station, where we stopped and they carried on. They were well experienced with two couples on board which made things go very smoothly. We met one or two boats coming the other way including one at the far end of the tunnel where they waited for us to exit. I am sure there is room for two Narrowboats to pass in this tunnel but you have to be 100% sure that the boat in the tunnel is not a wide beam.

The organisers of the Devizes to Westminster canoe race have been through the tunnel and removed all the expired chemical light sticks that they hung there for the canoe race last month. Well done them.

There were two volunteers assisting boats on the Crofton flight who were in contact with each other by radio and were able to advise each other of boat movements to and from locks, not only that but they were both boaters.

After a bit of lunch we visited the old pump house again and took one or two photos and some information that I had missed on Monday when it was in steam. Details on my other blog HERE 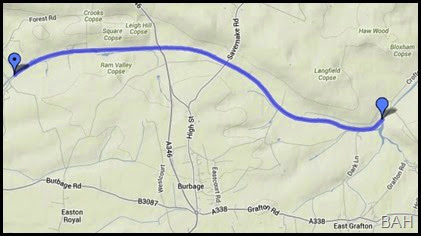