First the rain fall report, it rained most of last night and by 10 am this morning we had had 6.5mm fall, so far today has been mainly fine with a few brief showers.

This morning we were away at 9-30am and winded, I still can’t work out why they put mooring rings across a winding hole. It 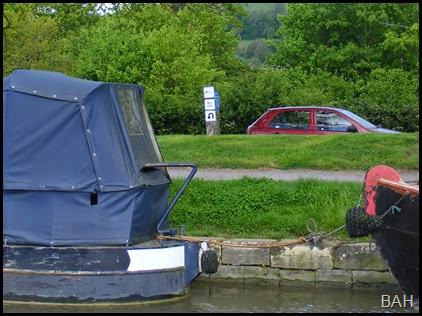 would be much easier to turn without them there.

So now we were heading back to Bath, its the forth time we have done this bit. We stopped for water at the top of the locks and while I set the first lock and worked down Diana set the second, here she met the Tuesday team of volunteers who helped us on our way. Last night I emailed CaRT to tell them that a paddle on lock 11 was out of action, when we arrived it had been covered in a black bag and taped up, also the mattress that we had managed to haul onto the lock side had been removed, so they do take action when you report problems. One of the lock gates has a bird nesting box mounted on it, for some reason the Wagtails like nesting on the back of the gates . 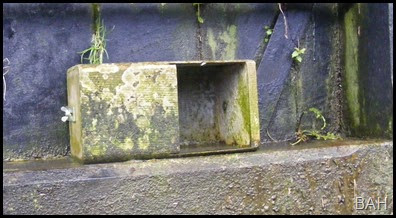 Once clear of the flight and it is a very slow flight as I well know by now you are out onto the wide river Avon, the flow seemed very gentle as we set off downstream.
There are some fine old flour mills along the river bank that have been converted to flats and appartments. 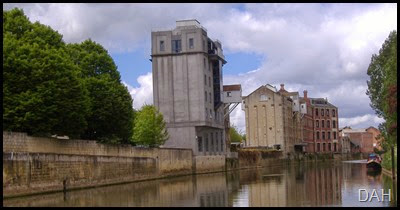 We stopped for lunch just above Victoria Bridge on some private, but free 24 hour moorings, I suspect its part of developers Amenity area that is included in all developments these days. 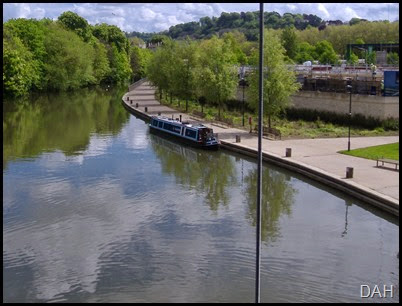 There has been quite a campaign running in the town to get the bridge restored, it was closed back in 2011 even to navigation for a time. They have built a new temporary foot bridge above it and are using that to support the he removal of the old bridge, all the suspension chains have gone and there is only a small section of decking left to remove. 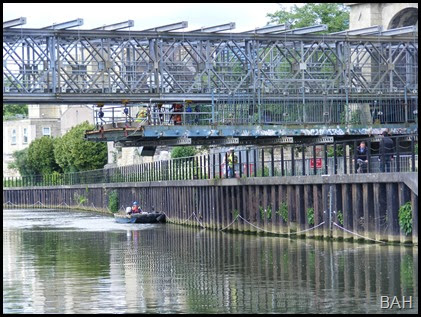 This is what the old bridge looked like thanks to a photograph by Jim Linwood BBC News. In his photo the bridge has already had a scaffolding division run along its length. 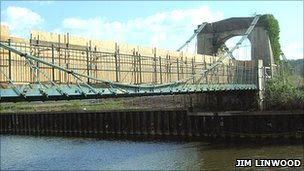 After lunch we pushed on to Weston Lock where we found a dredger busily working on the lock approach, we didn’t have to wait long for him to pull his mud flat to one side for us to pass. 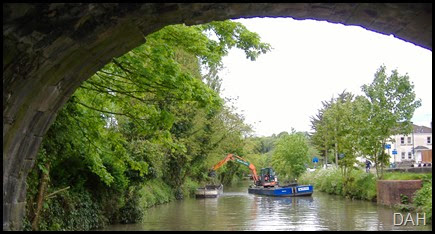 Unfortunately by the time we reached the lock a push tug and full flat was about to descend, I am sure there would have been room for us as well but they were away. We met them a little later bringing the empty one back. 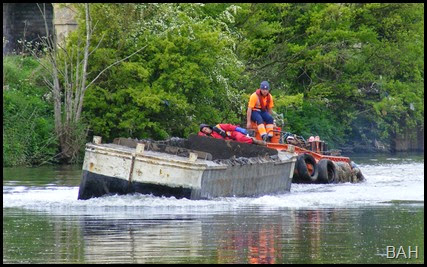 We stopped briefly at bath Marina and Caravan Park for a pump out, they have a nice service floating pontoon and I did a lovely 180° turn to come alongside heading back upstream only to find the pump was out of order, Things are getting a bit close now with the tank and the top, but I expect it will be Bristol before we can decant it.

About 2 miles downstream of Weston Lock they were unloading the mud flats and spreading it out on the adjoining land. They had three flats, one with the dredger being filled, one being emptied and the third in transit. 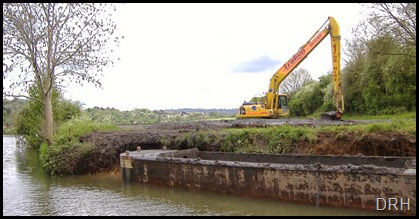 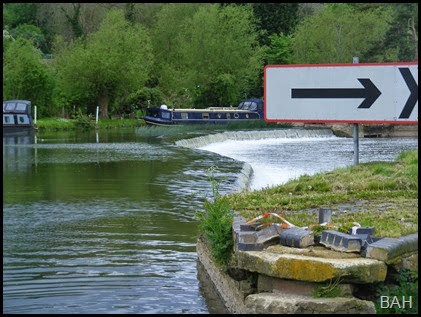 Lock.As you can see also the leading edge of the lock approach has taken bit of a hammering. These locks all look as if they have been extended at some time in the past. 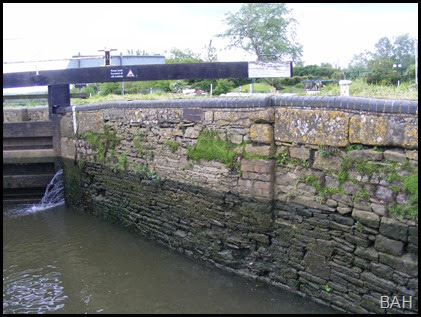 Another feature of these locks is that they have stairs cut into the sides of them, not nice edged ones like on the Thames but 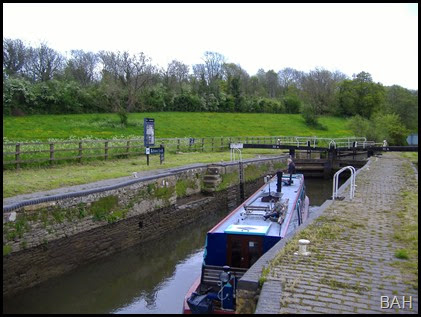 rough old stone ones covered in mud. Also they don’t all go to the bottom of the lock.

We passed under a fine tree of Mistletoe hanging well over the river. 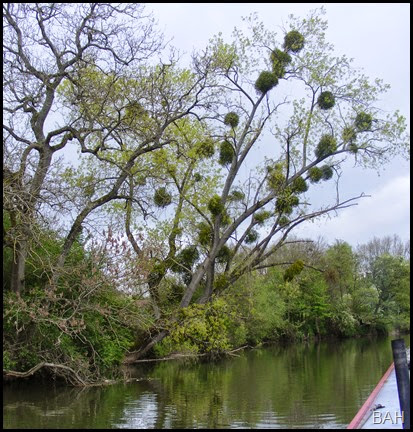 You could see from some of the debris on Saltford Railway bridge support the sort of thing that has been carried down the river. You wouldn’t want one of these boys coming into the bows of your nice GRP cruiser. 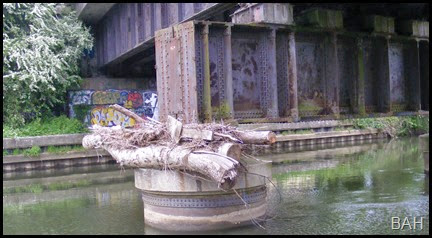 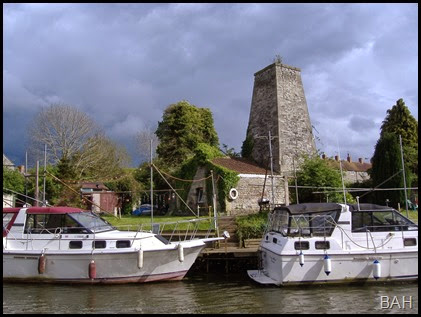 By now the river was much livelier , it wasn’t until after we had moored for the night at the 24 hr Ferris Bridge moorings that i discovered that CaRT are recommending that boats don’t pass Saltford lock in present conditions, O well we are here now so we will have to continue. 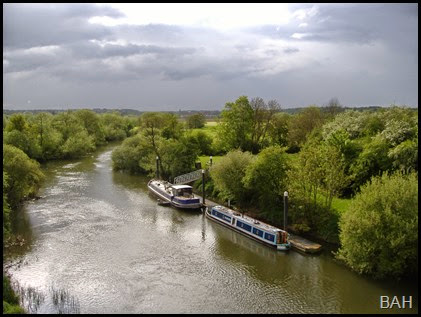 Down at Swineford lock the gates are in need of some attention as can bee seen by the number of wooden wedges driven into the holes in the bottom gate to try to make them hold water. 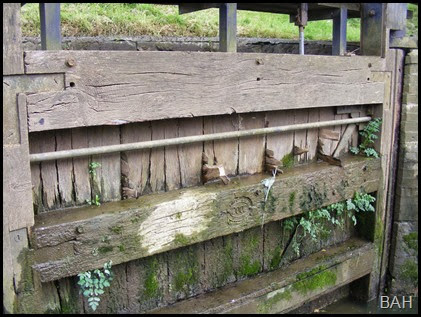 Mind you Saltford lock leaked so badly on the top gates that with both bottom paddles up it still took two of us to get a gate open.

I think this is a fish pass in the centre of Saltford weir, I am not sure if the wood has drifted there is is part of the construction.