Yesterday evening we had some cross our front deck, they were with the Bruce Trust boat Diana and we thought they were coming to moor directly in front of us, and got it a bit wrong, however they carried on down the cut to moor just before the next lock. A short while later the skipper, who just happened to also come from Suffolk knocked on the door and apologised for his crew explaining that their main drive coupling had failed going up the flight and that they had pulled her down backwards and winded directly behind us. They had had an engineer out and were now awaiting someone from the firm that made the coupling and would we please come down and join them for a cup of tea. Which we did.

Needless to say it rained on and off all afternoon and night, it was still drizzling this morning when we set off at 1030hrs. The “Diana” was still there but the engineer had been out and was coming back to fix it.

As we made our way down the canal the weather improved and was even sunny at times. We met one or two working boats on the way.

At Crofton bottom lock on the approach to the bridge there are a series of concrete bollards, I assumed these to be a war time addition to limit movement of invading tanks etc. across the canal, but looking at them more closely they are two preformed concrete sewer pipes filled with concrete. Did they have concrete sewer pipes pre war? 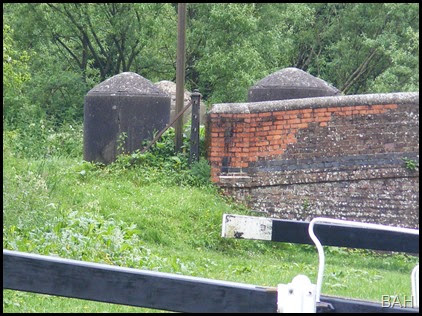 You can also see another of those nice cast fencing posts, but the wire winders are missing on this one.

I pulled over at Great Bedwyn for Diana to dump some rubbish but she didn’t take the BW key with her and the rubbish compound was locked. I did spot this old lorry parked there as I dropped her off 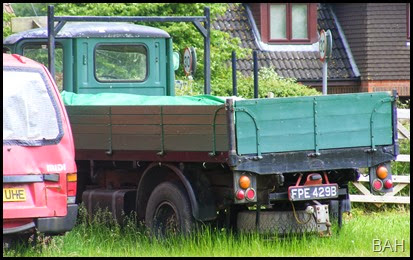 At Little Bedwyn lock there is a notice on the lock beam asking you to wait 20 minutes for another boat to save water, if you were going up then the lock would fill in 20 minutes the speed the water was coming in at the top end and you would just end up wasting a lock full anyway. 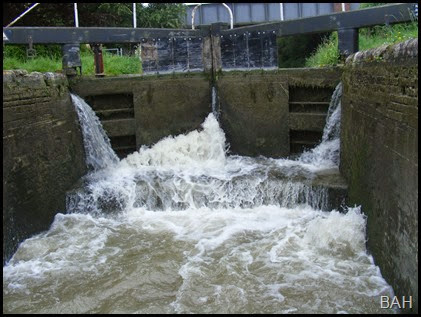 We carried on down to below Froxfield Middle lock and moored for the night against some piling, not much of that round these parts. I wandered down the towpath with the Ipad trying to pick up a BT hotspot without any luck, I am connected with the lap top thanks to my external booster. As I returned to the boat a chap was noting our number in his little book, so I engaged him in conversation, mistake, I was there for the next half hour. It turned out he was from the Reading and District Angling Association who have just acquired the fishing rights for this section and he was keeping record how long boats were mooring for, telling me that one in the next pound had been there for 100 days.

Hello, reading your blog I'm interested in the BT Hotspot coverage when travelling the canal system, do you find on the whole that they are plentiful and fairly good signal wise? can you also let me know what booster you use, I'm looking at possibilities of what networks to use whilst on our boat, thank you, Caroline

I use one of these http://www.solwise.co.uk/wireless-usb-rocket-bgn.html I think it came from e bay.
If there are any houses around I often find a BT hotspot or of course lots canal side pubs do free WiFi.
I can't see a house at the moment and have walked the towpath trying to connect the Ipad but this has found a signal for the laptop OK