Yesterday evening a 70 foot Narrowboat joined us at the bottom of the flight, the hire boat between us and the locks had gone so we moved along to make room for him, so it looked like we would have someone to share with. After helping him to moor he informed us he didn’t plan an early start.
8 o’clock this morning when the man came down to unlock the bottom lock we were ready for the off. The advantage at leaving at this time is all the locks are empty, they draw a bottom paddle 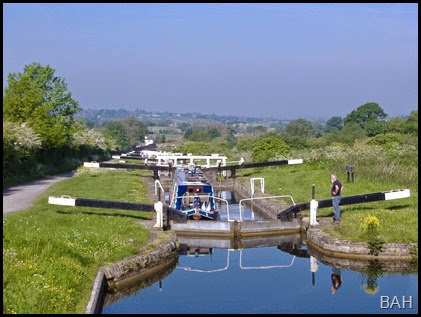 every evening, so each lock is ready for you. I worked Harnser up the first one while Diana went ahead and opened the next 6 bottom gates. She then drove the boat while I worked the locks until we reached the sixth, we then repeated the operation. Things went well until I saw someone on the paddles of lock 43 so guessed a boat was coming down, they were sort of. They got to 44 and set it opened the gates, some one set 43 and then they decided to go for coffee and have breakfast, just above the lock with the gates open, so we had to turn 43 and met them between that and 44. We were still in 44 dead on 10 am. After that it was just the other 6 up to Devizes. 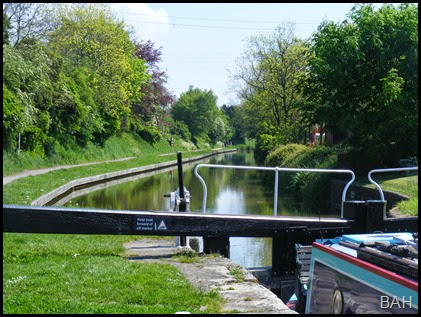 moorings in Devises, only 2 on the 72 hr moorings which is where we stopped and non at all on the town side by the car park. We were going to moor there but thought it may be a busy area on a Friday night

The mooring beside Car Park is OK any evening. There are a number of evenings where there is a function at the Theatre, but not rowdy, or late. There are two weekends a year where the car park is used for Beer Festival and for Devizes Carnival.
Terry Waldron