Bit of a late start this morning due to some telephoning that had to be done. There were quite a few boats on the move in both directions as we were ready to go at 1045 a single boat was just coming up the lock behind us, so we waited a few minutes and travelled with them. We were  lucky meeting boats at the lock and were able to leave all the locks open as we left.

I wonder how much longer this old chain will remain in Bruce tunnel, there is quite a bit still at the east end, but a lot has gone. 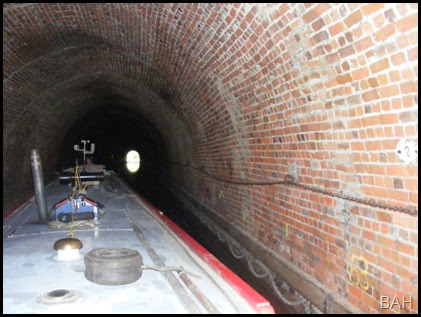 I also think to my self as I go through, just how much is there between me and that train crossing the tunnel roof. 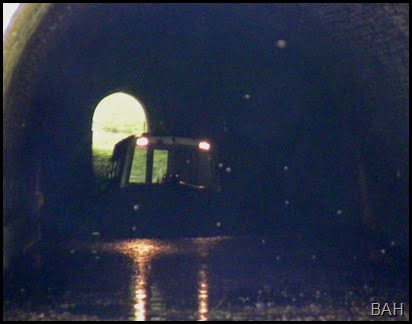 which could lead to some confusion when you meet them in tunnels. Of course at Bruce tunnel it could just as easily be a wide beamed boat coming towards you in which case there wouldn’t be room to pass like you would with a Narrowboat, so you have to be pretty sure what is coming before entering the tunnel or you could be doing a bit of backwards.

We stopped for lunch at the end of the summit just before the locks running down to the pumping station before winding and retracing our steps west for a bit. The summit level is down by about 150mm but it wasn’t long before the rain started so that will help, we had several very heavy showers only lasting a short time but if you were caught in one you would be wet. 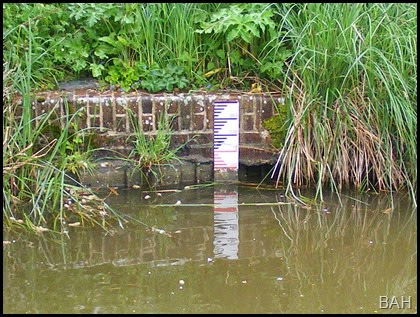 On my way back through the tunnel alone, Diana walked over the top I spitted something hanging at intervals from the old chain, closer inspection showed these to be chemical light sticks which were probably used in the Devizes to Westminster canoe race.

I do find this sort of thing annoying, just like when people put up paper signs directing people to an event and don’t clear them away afterwards. its just litter. I may well try and remove them next time we go through, or maybe I should contact the race organisers?

Passing the 48 hr mooring at Wootton Rivers there was only one boat there and they had just arrived. There are plenty of water spouts in the side of the lock here, a good reason not to boat 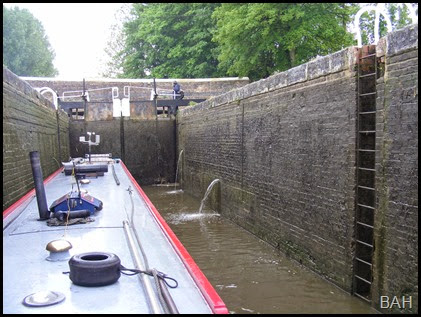 through locks with the side hatches open, you get dirty water on the polished brass on your vintage engine. A short way after this we came across a long Springer Narrowboat across the cut. the boat ahead managed to get round the end of it by going aground in the mud, So I pulled in and re-moored it, It had pulled the stern stake out and it wasn’t one of the short things that chandlers sell, it was a fair piece of iron. Once sorted we were on our way again to moor on the 48 hr moorings at Pewsey, these are not the best in the world but it is a bit deeper and there are a few rings, we found one for the front line but the back end is on a little pin.

Today’s map, we started on the pin with a dot in it, went east and then returned passed where we started and continued west to Pewsey.