Last night was quite a sunset here at Honeystreet and yes there are two white ducks in the photograph. This is just how it came off the card, no photoshop. 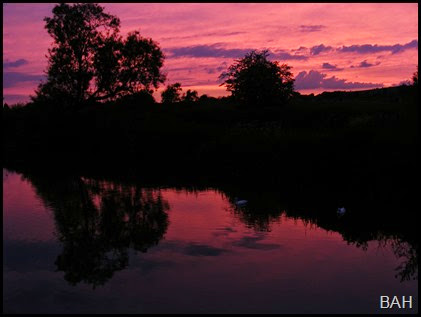 However it was the end of a nice day and overnight we had heavy rain.

This morning started fine and we walked round to look at the cafe that is getting the wonderful reviews in Trip Adviser, but can’t comment as we didn’t try it.

We set of west in fine drizzle at 1045 just as the CaRT man was checking the moored boats, its only a 24 hour mooring here in front of the pub. As we travelled west the weather was all over the place from hot sun to cool breeze. At one of the swing bridges Diana was told by a CaRT employee not to tighten the securing bolt on the bridge as not all the boaters have windlasses, he was to late, it was already tight and she told him about the girl catching her legs in one. Obviously these boaters never pass through a lock so can only cruise about 15 miles each way. Mind you the same guy sat in his truck,probably his lunch break while Diana moved the tools he had left leaning against the swing bridge.

As we approached Devizes this was the sky ahead. 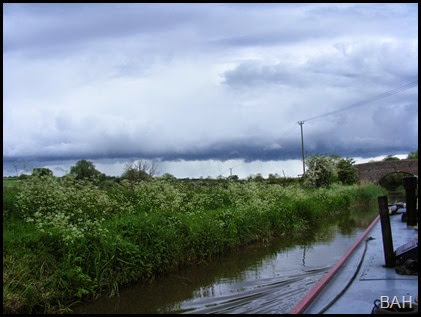 Then the big flash of lightning in the distance, it wasn’t long after this that it started to rain. By the time we winded in Devizes and moored almost where we were last week it was chucking it down.

This will be the last blog until after the weekend as we have friends staying and I wont have time to play computers.

The map should be back next week, I had to reset MotionX-GPS back to its factory settings and it erased all the saved routes including today's and yesterdays

What a lovely blog, which I've only just discovered. You're currently cruising the K&A which we did in a hire boat several years ago and repeated last year in our own boat.

I'm fascinated by your mention of MotionX-GPS, which I've just installed on my iPhone. Could you possibly explain, or direct me to an existing website that explains, how you get those maps of your daily cruises, and get the pins on the big map on your website of the points where you moored? I'm really interested in this but after reading the MotionX manual and Googling I can't see how to do it. It's all completely new to me.

Thanks in advance for any guidance you can offer.

Colin, email me on ditchcrawler at gmail dot com and I will reply to you direct.