This morning when we got up it started to rain so we waited until 1020 before setting off. by then most of the boats behind us had gone. I rather liked the paint work on Lazy Daizy. 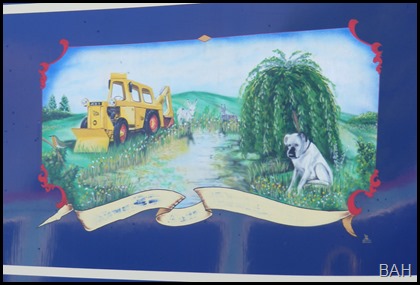 They have cut back all the scrub on the offside of the canal, I am not sure if this is good or bad as boats moored along the towing path are now quite open to the offside but it does mean that there are less places for unsocially minded people to hide. 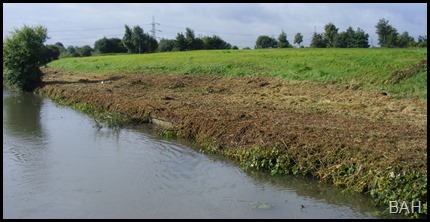 There are now even more manikins at Charity Dock running right back to the gardens. The Jim of Rosy and Jim was my favourite. 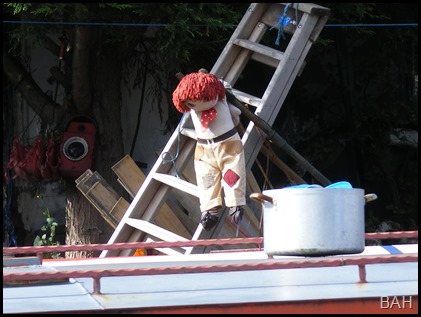 Its not long before you are into Nuneaton and there are even more allotments than I had remembered as I forgot about the ones as you approach the town. There were quite a few boats moored along the front of Boot Wharf some doubled up. One of the old quarries on the off side is now a large housing estate and its surprising how well established some of them look already.

When we come this way I wonder if this pole has been left purposely or did they just not bother to chop it off at the ground. 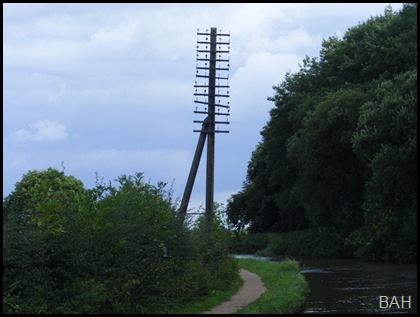 When ever I pass a floral memorial on the canal bank it sets my mind going as to why its there. Was someone killed here, or died in an accident, drowning may be, or was it just someone's deceased dad’s favourite fishing spot. This is by bridge number 28 and on the pot it says in memory of dad. 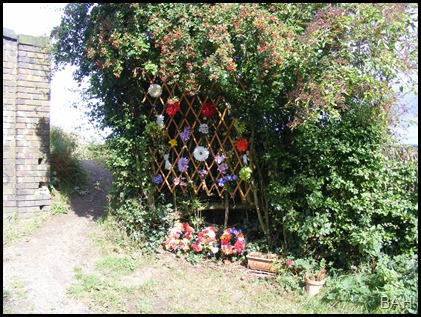 At Hartshill Yard a good section of towing path is no mooring and reserved for disable fishermen, I wonder if anyone has ever seen a disable person fishing there? 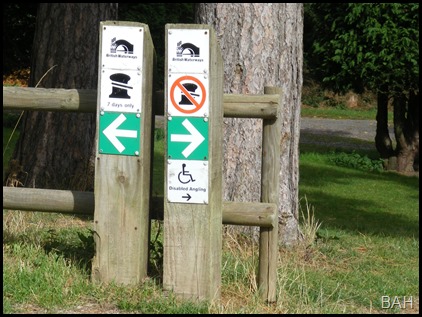 We passed this sorry site on our way to Atherstone, It doesn't appear to be tide to the bank at all, just laying on the bottom. 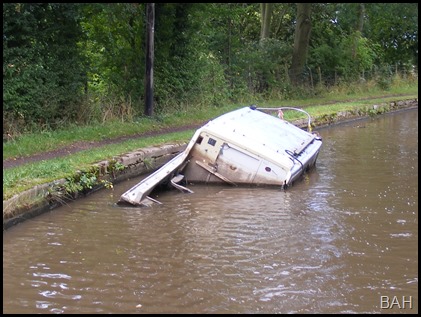 Just passed it there are two working boats moored on the offside right on a blind bend, which is where we met a boat coming the other way. We had been warned by Joe about the obstruction and were able to hold back to let the other boat through. I don’t remember these boats sticking out so far last time we came this way.

Just as we arrived at the top of the Atherstone flight it started to spit with rain but thankfully it didn’t come to anything. As we arrived the boat ahead was about to leave the lock and a boat in the second lock was coming up so we had to wait a short while, these locks empty much faster than they fill. There were 4 volunteer lock keepers on the flight. 2 at the top lock, one at number 3 returning from clearing up dog poo and one at number 4. The one at number 4 was the most use to us as by then there was no one coming up and he set the lock for us.

As we passed under bridge 43 I could see water dripping from the far side, once under I could see there is a water main crossing the canal attached to the bridge. So who do I report this to? 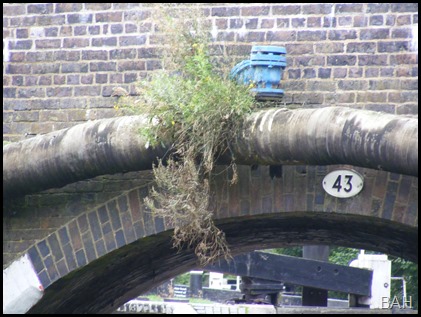 You can see the plants growing do to being regularly watered.

We had a mixed run down the flight having to turn some locks and meeting boats at others. We didn't go all the way down as we intend to stop at The Samuel Barlow tomorrow night to eat so we arrive at Huddlesford Junction on Friday. We moored up at about 4 pm, unbeknown to us until later nose to nose with Dragon Lady just before Whitley bridge, so Terry and Sal will be round for drinks later. By now we were in bright warm sunshine, which is not forecast for tomorrow unfortunately.

Its unbelievable how many people we have seen today who know us ether personally or via the internet. I wont try to name them all as someone is bound to get left out.

Love these blogs, did you pass the Greyhound Inn at Sutton Stop coventry?? Michael

We came through in the rain yesterday.