As planned we were away at 9am this morning. one boat left ahead of us at 8-30 am so he would be well ahead at the locks.

The day was really warm with hardly a breath of wind as you can see by the reflections at Irthlingborough Bridge. This can be a bit tricky when there is a flow on as there is a bend both side of it, but today I could have gone through backwards there is so little movement in the river.

At the next bridge there was a nice little pile of rocks behind one of the columns, just right for some little toe rag to hide and throw at passing boats. 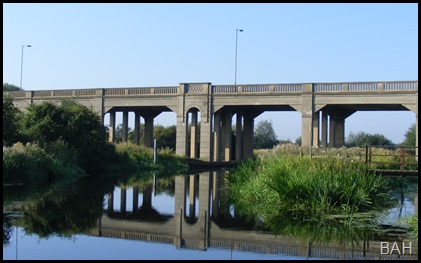 At Ditchford Lock there were two boats with unusual paint jobs, I was able to get a photo of the second but not the first as I approached the lock. 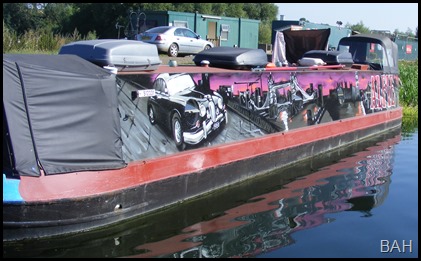 This lock has unhappy memories for ma as last time we passed through it going downstream I almost lost Harnser when we went broadside across the weir. No problems today with the gentle flow. A couple of weeks later a boat was lost here.

As we passed a bush two Kingfishers flew out, one went upstream like they often do, but the other stopped in the side of the bush, giving a rear opportunity for a photograph. 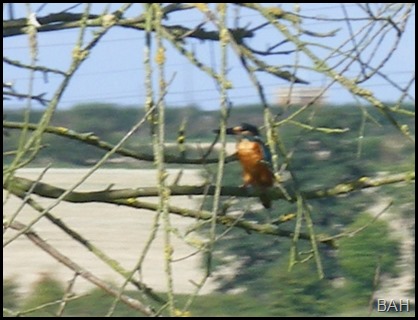 To show how low the flows are on the river at the moment in this photograph of Lower Wellingborough Lock weir you can see that part of the crest is dry with only a flow over the very lowest section. 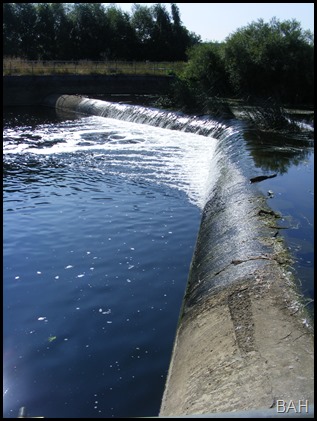 Wellingborough doesn’t look that good a place to overnight when all the safety equipment has been removed due to continual vandalism and even the travelling amusement park has CCTV.

I am glad we didn’t come this far last night.

At Clifford Hill lock we said goodbye to Graham and Lyn on Grayling who we had been travelling with for the past two days. They moor at the Northampton Boat Club just before the next lock and as they arrived at this one before us they arranged for Nb. Snowgoose  to wait in Western Favell lock.

We arrived at Western Favell and sure enough there sat Snowgoose as good as their word. We only shared two locks with them because we both stopped for the night outside The Britannia pub just on 5 pm. we had done a 8 hr day.