We were lucky to get a table last night in the Spice of Bruerne, we arrived at the same time as another couple and took the last two tables.
It turned quite cool overnight with the temperature dropping to  7°C outside, but it stayed fine and today was quire pleasant.

Stoke Bruerne is one of the places that CaRT have introduced their new mooring policy. 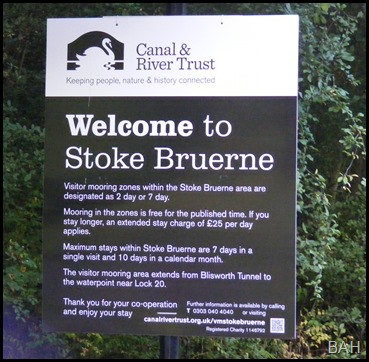 Just prior to the tunnel there are two buildings, one is where the “Leggers” use to wait, they use to work the horse drawn boats through the tunnel by laying on wooden planks on the foredeck and walking against the walls of the tunnel. The other was a blacksmiths shop. This has recently been refurbished and taken over by a working blacksmith. 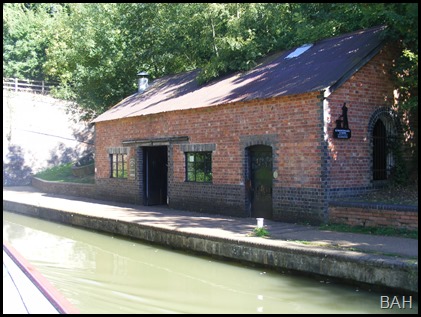 This morning before setting off we visited the museum shop and also the cheese boat to get a few bits and pieces. We pushed off at about quarter to eleven and met our first bout just as we entered the tunnel. Next on the list was a hire boat who didn’t realise that boats travelled in both directions through it. 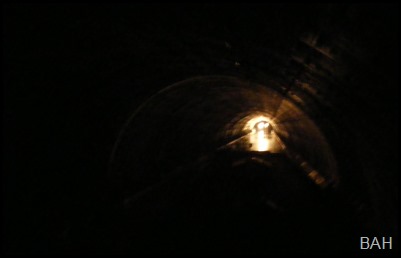 They were making quite slow progress and the next boat asked if they were having problems, they had only just picked the boat up from Gayton so had only done a couple of miles and here they were in a 3000yd tunnel.

Blisworth tunnel is reasonably dry at both ends, by dry I mean that water is not dripping through the roof, but the centre section water flows through the lining in several places including a steady stream from the roof in one place. Normally if you are travelling north up go right under this if you keep to the right hand side, I was lucky not to meet a boat near it and was able to change sides and keep dry.
There is a very good explanation as to why different sections are wet in Kathryn’s Blog at
http://leo-no-2.blogspot.com/2013/09/blisworth-tunnel-geology.html

Once out in the sunshine again we met these 8 youngsters in tandemed canoes. Their progress was somewhat erratic but I guess these are not the most manoeuvrable craft on the waterways. 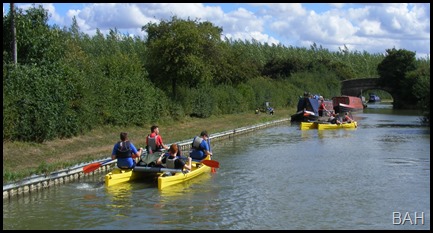 Of course another chat with Keith and Joe was called for, they make rag rugs to sell and are always on the lookout for old sweatshirts, Diana saw this as a great opportunity to get rid of one of mine, it was almost two, but I saved one.

Coming passed the longterm moorings at Nether Heyford there are two Buoys in the water against the towing path side for some reason.

As we passed under one bridge I heard voices above and looked up, it was a photographer but she didn’t want to photograph me, she was more interested in this couple. 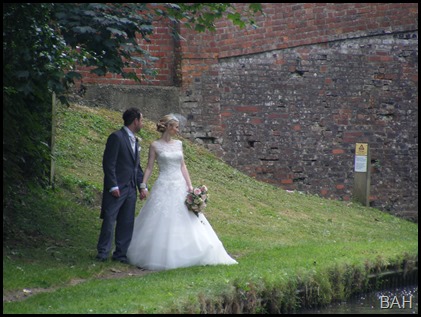 We stopped at Stow Hill Marine and filled up with diesel at 88p/lt hey have just sold a boat called Harnser.

From here we pushed on to Whilton and as we passed under the bridge I could see a boat leaving the bottom lock and one starting to go in, thankfully they were good enough to wait for us to share the locks with them. We had a reasonable run up only having to turn a couple, the first boat we met as they left the third lock up where busy mopping up, they had cilled the boat in the previous lock, fortunately there were two experienced boats waiting to go up and they saved the day. We moored in the top pound just before the top lock stern to stern with a hire boat dead on 6pm. As we tied up the crew of the hire boat returned and immediately started their engine. About 7-30pm we headed of to The New Inn to eat, as we crossed the lock I noticed that not only was the near side gate wide open but the offside ground paddle was also up. Its a good job we didn’t dally as the pub stops serving food at 8pm. We found the pub staff friendly and there were 4 beers on the pumps. The food portions were a good size and the menu selection reasonable with all the normal pub grub on it in addition to 4 vegetarian choices and about 6 sweets.

Returning to the boat and typing this the hire boat engine is still running, maybe its a wheeze to make more money out of the diesel the hirers have to pay for.