We were off just after 9 this morning, 1 boat had already gone passed and the boat behind us, Lady Esther was also getting ready to set off.  As we made our way along the pound we passed this pair of old wooden boats on the off side, looking as if they need a bit more TLC.

Shrewley tunnel was very wet, its a very long time since we have been this way and I had quite forgotten how bad it is. The tunnel is unusual in that it has a separate horse tunnel running through the hill at a higher level. The norm was for tunnels without a towing path through them to walk the horse overtop of the hill. 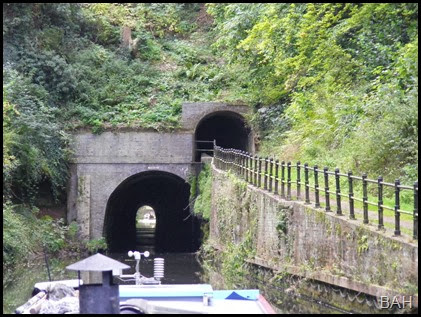 I could just see the boat ahead through the tunnel, I thought they would be well gone by now, behind Lady Esther was closing on us. As we arrived at Hatton top lock the boat ahead was just opening the second top gate and waved us in, by now Lady Esther was close behind. We worked down with the two chaps on the boat we caught up with but they were only going to the Dry Dock, 3 locks down, so I called to Angie from Lady Esther that we would wait there for them, Just to improve things a boat was leaving the third as we did the second, so that was one less for them to turn. We waited in the forth lock for them and turned the third ready and then spent the rest of the flight with them.
We had a fair run meeting a single in the next lock and then a tug with work flat breasted in the next. This was followed by two more pairs of boats that had decided to breast up to come up the flight. Easy for them but a pain for us in the very short upper pounds. After that all the locks were with us, but most had leaked about a foot so it wasn’t plain sailing. This carried on until 3 before the end which were all against us and no one coming up.

At the bottom we both went into the Saltisford Arm Lady Esther to moor for the nigh and us to get a pump out. They were in luck and we weren't. The chap that does pump outs is off on a Thursday afternoon, so we backed out and carried on down the GU. Luck was with us again at Cape locks as a single boat was just coming into the top lock from below,so they were both with us. We winded at Kate Boats and dropped back to their yard for a pump out. The chap did a very through job with 4 rinses but it cost us £20. Now the interesting bit, we needed to reverse back to the winding hole, another boat was reversing back to the service moorings and a third boat was reversing back to wind in the same hole as we wanted. So that was three Narrowboats reversing in both directions in 100yards of canal. Needles to say when it was our turn to wind there were two boats coming down the cut.

That all sorted it was off to Leamington to arrange a car hire to get us home, our car is still in Brandon. Enterprise Car Hire are in one of the railway station buildings so very handy to the canal.

Now for somewhere to moor for the night, Radford Semele is always a favourite opposite the church. This is the first time we have been this way since the scaffolding was removed from the church roof following a bad fire in 16 March 2008. Restoration has taken over 5 years and you can read about it at http://www.stnicholasrestoration.com/