Yesterday afternoon we went for a wander round the area. The old wooden Narrowboat Dane is having a lot of timber work done to her hull on the other side of the cut.

We ate in the Samuel Barlow last night and some of the dishes are quite interesting. There appears to be no fixed menu and the chef chalks up what’s on that night. Thursday is a low fat night and there were abut 6-8 choices on the board all home cooked. The beer, Speckled Hen was good as was the price and to say its dog friendly would be an under statement. Last night there were 5 dogs in there, Sunday they did Sunday Lunch for 100 dogs in the pub, it must have been some event. You are guaranteed a very warm welcome from Paul the Chef/manager who takes the trouble to talk to all the customers and go through the menu with them so you know what you are getting.

This morning we were off at 10am meeting a few boats mostly in awkward places, as you do. I didn’t realise that Tesco Express were fitted with the same electro magnets as the big ones, I just passed under bridge 66A and bang, I am clamped to the side, it had the same effect on the ex-working boat Python who came in behind us. I do love her bow. 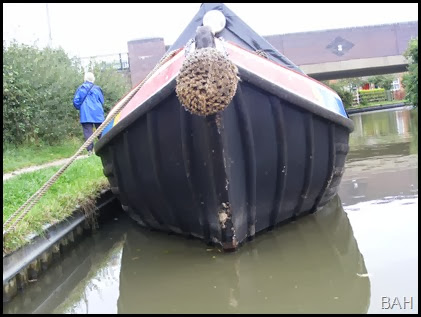 We were soon on our way down to the Glascote locks where we caught up with the boat ahead so had to turn them both. There is a house near the bottom lock that has a very bright floral display, but I think they are all plastic. 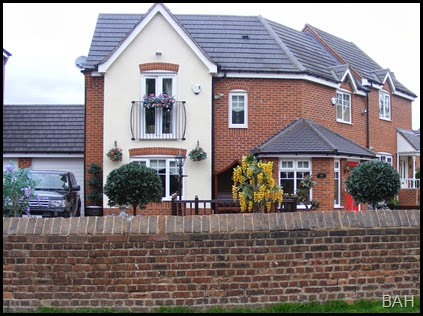 It would seem that CaRT have a maintenance yard below the locks and moored outside are two flats containing new lock gates, maybe they are going to transport them by water? 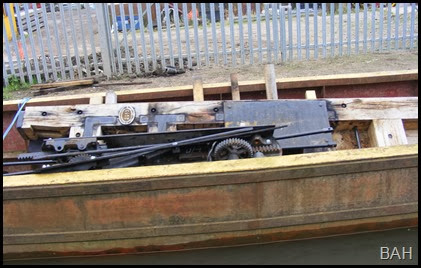 It wasn’t long before we were at fazeley junction. Here we turned right, a boat had just come from the left and indicated there was a boat following, so I nosed out very slowly, the other boat was miles away so I carried on which was just as well as the second boat wanted to turn up the branch we had just come out of. Again on this stretch of water we met several people who know so greeting were exchanged as we passed.

Just under School Bridge Hopwas I spotted some heavily laden Damson bushes on the offside and as Diana collected a bowl full from the bows I did the same at the stern. We passed a boat moored on the visitor moorings with a Spaniel that loved fetching things, once he brought it back he begged for it to be thrown again. 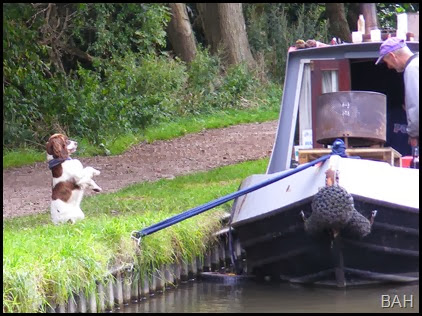 Our destination for the weekend was now not far away and at bridge 81 we started passing the first of the moored boats attending the gathering, down to tickover and slowly on to the junction, as we passed the Harbour masters boat we were instructed to go to the end through bridge 83 and moor up. We moored on the aqueduct at 3-30 pm and then wandered back to the site to book in.

As we were late booking all the seats for the meal and entertainment of Saturday were gone, so when we booked in I asked if they had had any cancellations, the answer, just two, so we were in luck and paid for them as well. When we returned to the boat there were two more boats moored beyond us. It is still easy walking to the site, a lot better than many we have been to.

If there is anything of interest I will post over the weekend, if not it will be Monday when we move again.