Boats started passing at 7am and the moorings here have a self below the surface, it was fine last night with no movement but now every boat movement leads to a Bang Bang Bang against something hard near the bottom so we were up in good time and away a few minutes after 9am. As we were pulling away a Kate boat came to moor in our place with an all male Canadian crew who are all members of the Royal Canadian Yacht Club.

The North Oxford looks as if it has started to suffer land slides a short way passed Kent Road bridge.

The mural on the old bridge wall just past Clifton Cruisers is still looking grand and a credit to whoever maintains it. 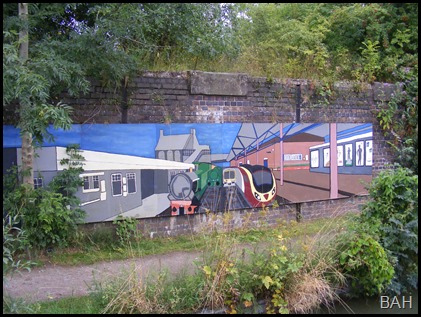 The big Tesco electro magnet was switched on at Rugby so we had to stop and shop. It only switches off and releases us when I put my pin number into their checkout. We moored at the first mooring passed the water point, when we returned there was a boat moored behind us, they locked up and left. No it wasn’t a hire boat. You can see the Mooring for water sign and them walking away in the distance. 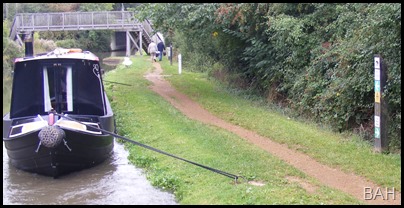 At Newbold Tunnel the lights were out so there didn’t seem much point in photographing it, maybe the shilling (remember them) has run out.

Beyond Stretton Stop, needless to say the foot bridge was closed, two employees crossed but nether helped Diana open it there is a new cut on the offside just before bridge 26 right against the railway, could this be the start of yet another marina? at the moment it only looks big enough for one boat.I am sure someone knows. 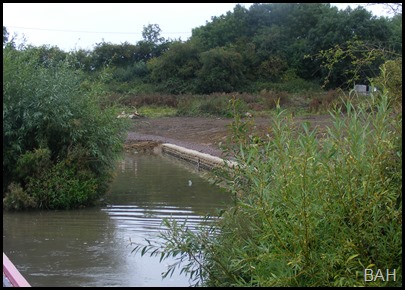 Did I mention it was raining, it started about 12 and continued for most of the afternoon, we met several boaters hiding under their brollies, I use one if I think it will be a quick shower but otherwise its on with the wet gear. At Ansty all the long term moorings opposite the Rose and castle are empty, they were last year when we came this way. The visitor moorings at the end all round the bend to bridge 14 were full, we met a CaRT flat just before we reached the first moored boat which was luck as you go round blind and anything coming towards you is on the wrong side of the cut. CaRT had left the rest of their fleet moored right in front of the “Strictly No Moorings” signs. It would have made my old mate Jeff Dennison very happy to have seen that, I bet right now he is up there looking down having a good laugh. Jeff campaigned against the No Mooring area that was only introduced because one of the householders didn’t want boats moored in front of her property. 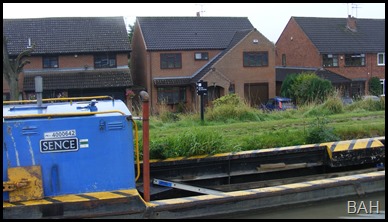 We picked a few Blackberries on the way, well Diana did, I just tried to keep the boat in the right place for her. 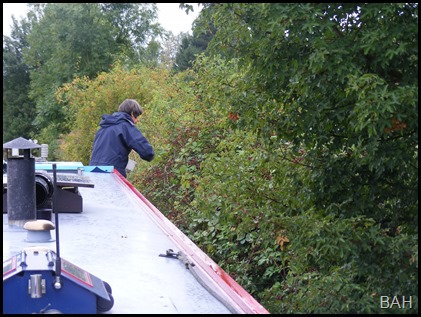 We were a bit undecided where to moor, we found the traffic noise quite intrusive from Ansty onwards until we were close to Hawkesbury Junction and then all the moorings on the straight were taken so we locked down onto the Coventry Canal went under the foot bridge with a 180° turn and continued towards Atherstone a short way before mooring against the towing path.
Just round the junction all the local Starlings seem to fancy just on block of houses, there was not a single bird on the others.

This stretch of canal is amazingly busy for moored boats and we slotted into a vacant spot well before the end.