Last night we ate in The Wharf at Welford. I had a chilli con carne  and it tasted of chilli not just mince like so many do. Diana had fish pie with fresh veg and they were fresh and also freshly cooked, not sat in hot water for hours. The portion size was good and they had lots of different beer on.

This morning we woke to a sunny morning and when we set off it was quite warm, but it wasn’t long before I had a jumper on and then a fleece on the top.

We set off at 9am and it seemed that half the visiting boats in the arm had the same idea. Before I could wind I helped the owner of a 72ft Davis boat to pull his boat round, there is just enough space with his stern fender lifted and to avoid ramming the dry dock dam, he pulled the stern round with a rope.

Following this we winded and headed back to the GU Leicester Line catching up with the two boats that left before us at the lock. Once clear of the arm we turned left towards Crick. We met a few boats on the way and were even invited to overtake one that we caught up.

We passed Tom’s Eggs but didn’t stop as we now had some, as you can see his sign is not very visible from the canal, we were right beside it to take this photo, another 10 yards and its invisible. 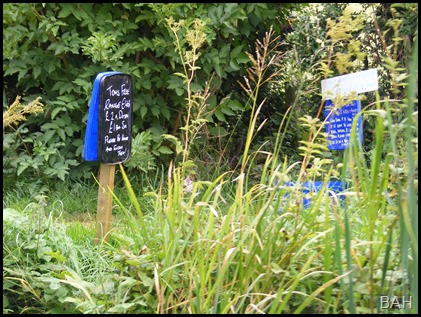 We didn’t meet any boats in Crick Tunnel but met one shortly afterwards who told us there were about 20 boats waiting at the locks. It transpired that CaRT had been pressure washing the lock gates from a work boat and although they arrived at 8am do to one thing and another they were still at it and boats had only just started moving. When we arrived at the locks around 1430hrs there were 10 boats ahead of us waiting to go down and the first lot were on their way up. We spent the afternoon helping to lock all the waiting boats up and down, there were only two after us and a couple got stuck at the bottom overnight.
We cleared the flight at 1820hrs passing the two waiting at the bottom for tomorrow morning.

We called in and bought some more chutney just opposite the Watford Services and then pushed on to Norton Junction, the footbridge was very well lit in the evening sun. 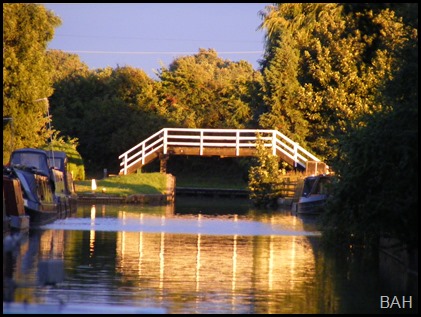 Most or the mooring spots around here were full including the piling on the way to Braunston. These old work flats are still tied up on the off side before the bridge, they have been here for years now. 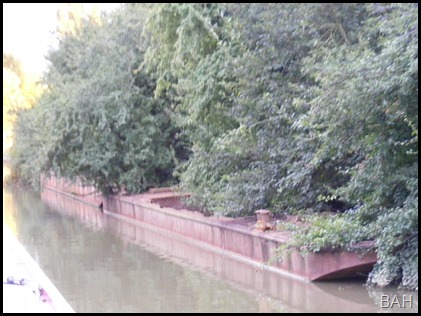 At the junction we turned right towards Braunston and it wasn’t long before we had a wonderful sky ahead of us. 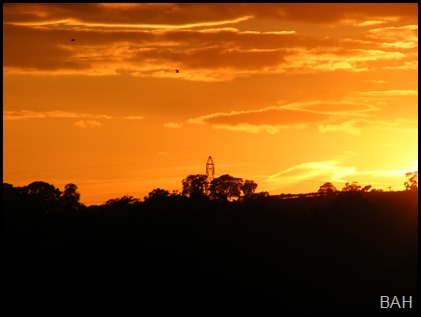 As we approached the tunnel it was getting dark but I could still see light at the far end. Once you are in the tunnel it doesn’t matter how dark it is outside, I just hopped I didn’t meet a wide beam sneaking through when he thought no one was about, but we had a clear run. Buy the time we reached the Braunston end the light was well gone and we moored up at the beginning of the 48hr moorings after the wet dripping water section of towing path. The time 2020hrs. over an 11 hr day. It took me back to out hire boat days and goodness knows how many locks we worked, we must have helped at least 12 boats up and down the flight before it was our turn.

You are following us! We were the last boats down the Watford Locks this morning. Where are you heading?