8 30 this morning and we were about to have breakfast when a boat went by heading for the locks. Breakfast was put on hold and we nipped off after them, catching them up as they waited for a boat to come out of the top lock. It turned out to be Pendelford who had been behind us yesterday at Watford and had also been helping to lock boats down. As we worked down the flight we met boats at over half the locks which saved closing gates. Braunston was quite crowded but there two mooring spaces just before the disable moorings by Butchers Bridge where we pulled in to have breakfast and do a bit of shopping in the village.

The village shop is quite good with beer 3 bottles for a fiver, O and we did get some other odds and ends we needed while we were there.

Again the day had started sunny but so became overcast and then this turned to steady rain for the afternoon. We made our way along the Puddle Bank meeting several boats on the way. As we approached the Oxford Canal we were welcomed back by a fly passed. I don’t know who organised the Red Arrows for this, but thanks anyway. 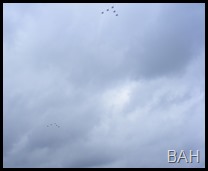 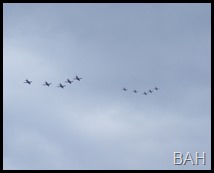 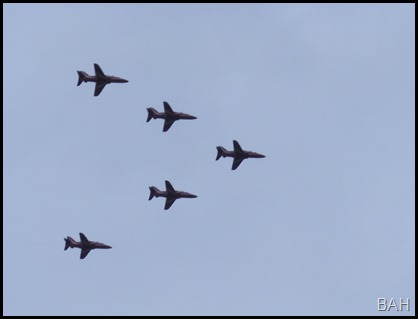 As we approached The Bridge Inn at Napton we spotted this board giving advanced warning. 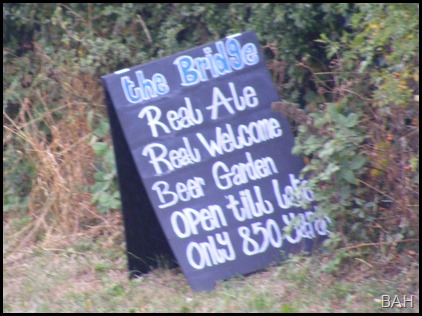 It looks as if they do food every day from noon till 9 and it didn’t list days.

At Napton bottom lock not much had changed since we were last this way, there was a boat in the lock ahead going up, it was raining steadily. What had changed was two lock keepers/volunteers working the lock for us. We had to wait for a boat to come down and then we were off, we turned the second lock but after that we met boats all the way up and only closed the gates once. Once at the top of the flight we moored up and went for a walk along our old moorings, we were considering stopping here again for 7-8 months but the only spots available would be down the Engine Arm and I am a bit worried about getting in and out when water levels are low. I tried it today and got in and out OK dragging through the mud at the entrance but the water is 2” over weir, in the summer it could easily be 4” below weir height. After mucking around for a bit we decided to stay at the top tonight and make our way to The Blue Lias tomorrow.