Last night mooring spot proved to be a good choice with very little traffic noise, if you look at the map you will see its just about the furthest point from the road. We woke to rain but it didn’t last long and we had nowhere near the amount forecast, less than 1mm so it wont do much good.

This morning the canal seemed to be flowing quite a bit so I wondered down to the flight to check an earlier boat hadn’t left a paddle half up, what I found was one paddle fully up on each gate of the first two locks so I guess that CaRT were letting water down.

We set off at 10am passing Snowgoose who had moored at the first lot of piling they had come to right by the busy and noisy road. I was rather taken by these “flower pots” on the roof of a boat moored down the arm.

We stopped for water at the Junction and while we were there Nb Norfolk Lass came passed who moor at Little Ouse moorings where we use to be.
Being back on the canals we have spent quite a bit of time “socialising” with people we haven’t seen for a long time. First there was John who came out of his house to see us as we finished filling with water, then there was Joe and Keith on there boat where we stopped for another good chinwag, later we met Kathryn who I have chatted to on the internet and I expect there will be others before the day is out.

Once full of water we set off towards Blisworth Tunnel but soon came to a halt as we met this wide beam hotel boat Isabella in the first bridgehole by the junction. 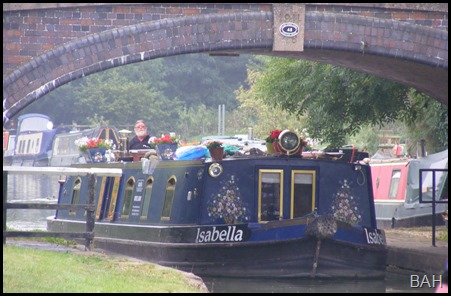 After this the canal was very quiet and we only met one boat between here and the far end of the tunnel.

One of the boats moored outside Blisworth Marina was supporting some very natty fender hangers. 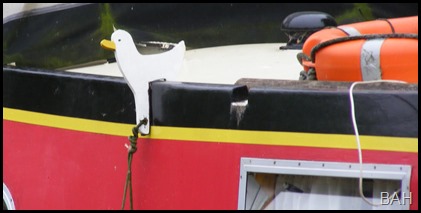 Last time we were this way the marina wasn’t finished but now it has a very smart building canalside.

The old marina at Blisworth, Blisworth Tunnel marina made a nice photograph with all there boats moored herring bone fashion along the front of their building. 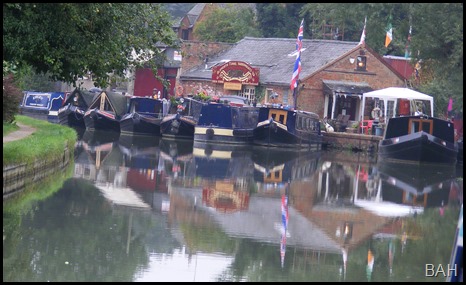 As we entered Blisworth Tunnel it was completely clear and I could see the far end some 3057 Yards away. For the most part it was dry except for the ventilation shafts which were very drippy and one has a spring flowing down from it. As we approached the end of the tunnel a boat entered from the Stoke Bruerne end but as the tunnel is wide we passed with no problem. We carried on to the top of the Stoke Bruerne flight of locks and winded to retrace or steps to the first available mooring right behind the Cheese Boat.

After lunch we wandered down to the locks disposing of the used bottles at the bottle bank behind the Boat pub and then visited the museum. The ground floor is now turned over to a tea room and shop with the museum relegated to the upper two floors but they have laid the displayed items out quite well.

Tonight we are planning to eat at the Spice of Bruerne if we can get a table, we were unable to book as they close Friday lunch time. if we cant get a table we will have one of their takeaways on the boat.