Two boats came down the top lock at 9-30am so we set off to make use of the empty chamber, we were over half way up when the lady from the boat we shared with walked up with her rubbish to bin and as we were leaving the lock her husband arrived with the boat. Above the locks the  boat that went up last night was still moored on the waterpoint, I suspect its the same boater who left the gate open and paddle up.

At Norton Junction we went straight ahead on the Grand Union Leicester line, looking across the valley I am nor sure what Braunston had done wrong.

At Watford we called into the garden shop on the off side, unfortunately there weren’t any eggs for sale but we did get a jar of home made Chutney. On to the Watford Flight where there was no one waiting to go up. Diana went and found the locky and booked us in, straight up after the second boat. by the time we went up there was four behind us so we timed that just right. Being a staircase the level between the empty lock and the full one above starts of quite large and this gave rise to a rather splendid fountain from one of the gates. 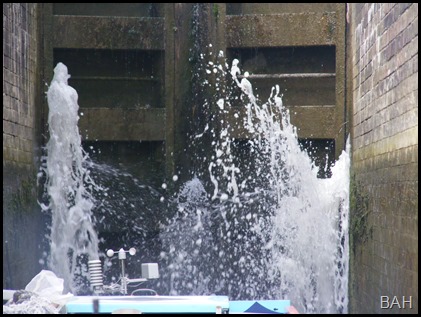 When we reached the top there were 7 waiting to come down.

Crick Tunnel had a good fugg in it and was quite warm and damp, this is only a baby compared to Blisworth at a mere 1528 yards, just under a mile. The first three quarters is very dry but the Crick end is a bit drippy, but no waterfalls. There was a boat ahead of us but he was almost three quarters of the way through when we entered the tunnel. We emerged at the Crick end to bright warm sunshine. As the day progressed it became overcast and we had very light rain this afternoon. We met probably about 8 boats all day but we passed quite a few moored ones, there are some very nice rural moorings along this line. Just beyond Haddon Road Bridge we saw a sign advertising “Tom’s fresh eggs” but it was so shallow I couldn’t get against the towing path, so backed up to the bridge hole so that Diana could get off to buy some, when she arrived the honesty box was empty, so still no eggs. One of the residential boats just before Lubenham Lodge  as a chicken house butty. 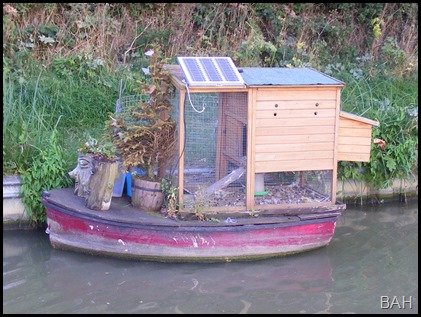 We were intending to moor opposite Lubenham Lodge but as the hedges have grown up since we were last this way there didn’t seem much point so we carried on to the visitor moorings above the Foxton Flight, like Stoke Bruerne these are now also limited to 2 day with a £25 charge for each night you overstay. It was just on 6-30 pm when we moored up, so that is a 9 hour day and a 20 mile long pound with no locks, two tunnels one flight of six narrow locks, two junctions and one double lock.