We woke to rain so were in no great hurry to get away. A little after 10 am we heard a “Hello” outside the boat, thinking it was someone calling a greeting to a passing walker or boat we ignored it, then the voice said “Hello” again, but this time with more urgency. I looked out and there was a CaRT operative outside the boat, he welcomed me to the Foxton visitor moorings and gave me a leaflet all about the new mooring restrictions in the area.

The first thing we did when we untied was to fill with water, followed by some Aqua-Scrumping from the apple tree at the end of the peninsular, between the top pound of the old incline plain and the line of the locks. 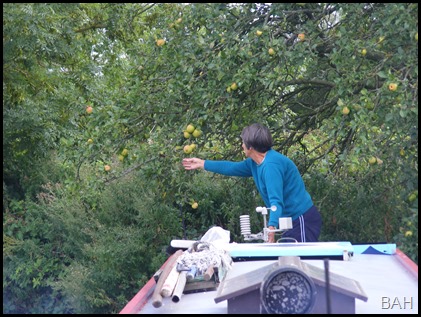 These were added to the Blackberries Diana picked a little along the cut, put in the slow cooker to stew and we had them for afters lunchtime. 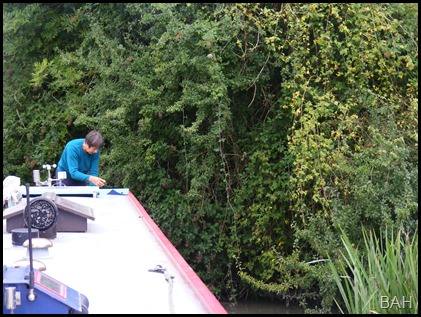 We passed the boat with the chicken coup butty and I took another photo just to give an idea of scale. I rather liked the way he has painted the back of his solar panel, I say he, it could of course be a she, I don’t know. 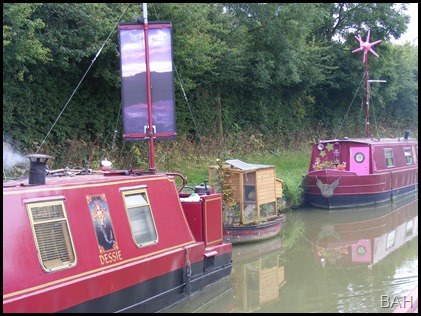 Yesterday we had passed two CaRT workboat moored at the site of towing path/bank repairs. Today they were hard at work and as you may have guessed this is the spot we met an oncoming boat.

At The junction with the Welford Arm we turned left, just as a boat was leaving the arm, so I think well that is at least one mooring spot, we met 4 more before we reached the terminus. We moored on the first section of straight piling we came to and since we have been here 3 more boats have arrived.

We walked to the village post Office to buy some eggs at last, so now Diana can make that cake.