The first old boat went by this morning before it was light and by 8am it had been followed by many more. We pushed off about half ten and stopped at the CaRT Fazeley Offices to fill with water and dump our rubbish. It was just on 11am when we reached Fazeley Junction. There have been semi derelict buildings on this junction for years and work seems to start and stop periodically, more stop than start. 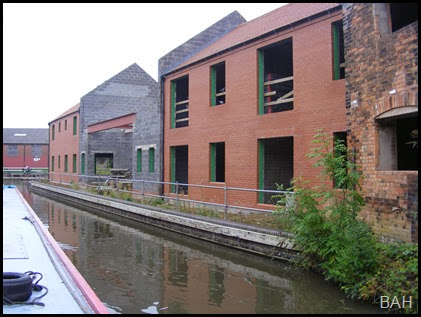 We turned right at the junction onto the Birmingham and Fazeley canal. One of the things that people probably remember best about this end of the canal is Drayton Swivel Bridge with its high level the foot bridge as well as the swing bridge.

This bridge is normally left open, but today as they were working in the fields to the left it was closed. We had just gone through and Diana had closed it when a single handed boat came along, so Diana opened it again for him. 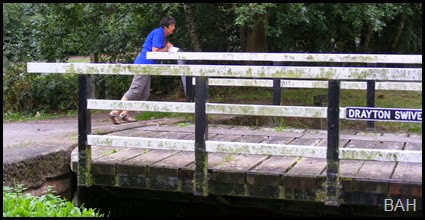 Along this stretch of canal BW spent thousands of pounds installing miles of coir sausages to grow reeds along the edge of the piling in the water, It was a complete waste of money with about 1 plant growing per length, its suspended by being wired to strips of flat steel hanging over the piling just waiting to rot off an catch round someone’s propeller. However today this little chap found a use for it, so all that money hasn’t been in vain after all, but I suspect he would have managed without it OK. 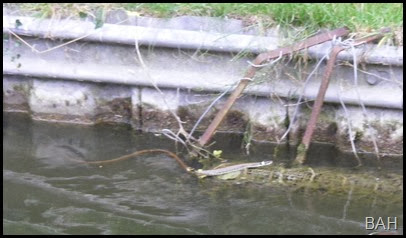 Last time we came this way there was a conveyor running parallel to the canal and towing path carrying gravel. That has been removed and they are putting a road in its place with access from the towing path. New hides have been erected around the lakes so I am guessing that quarrying is now finished and the site returned to nature with access roads.

As we approached Curdworth locks the canal was like a mirror 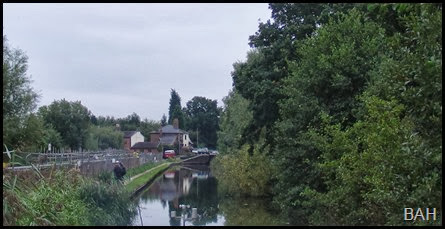 with not a ripple to be seen. Behind the towing path they are constructing what looks like a flood defence. I am not sure if this is to keep water out of the canal from the flooded pits of water from flooding from the canal to the pits. It cast concrete with brick facing and runs right up to the bottom lock. 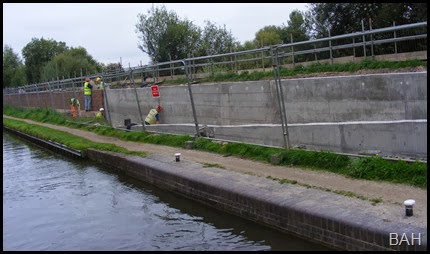 The top gate of Curdworth bottom leaks quite badly, the sealing strip down the hinge side of the gate has come adrift leaving a quarter inch gap for some distance.
We met a couple of boats in the flight but we later found out that Skylark was running up ahead of us, so there were several to turn. We also found some really sweet Damsons at one of the locks, all the low ones were gone but with the aid of the boat hook some were removed from the upper branches.
What I find strange is most of the weirs running but the short pound around lock 4 was a foot off the mark. Something must be leaking badly. CaRT must know as that is where they park their truck.

Salvation did come before the top when we met Copperkins coming down, with no other traffic on the move we were able to leave the boats in the locks and have a chinwag.

Curdworth seemed to erected some interesting signs on the towing path to show you are in the village, with a little more thought they would have made nice seats. The name Curdworth is in the tiles. 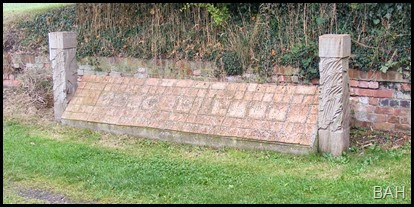 Leaving the flight we passed through Curdworth Tunnel, luckily I remembered the bulge at the far end on the offside, last time I clipped the handrail on it. We carried on just passed the long closed Kingsley Pub to get a bit further from the road before mooring up for the night.