Last night we walked round to the Boathouse to eat, its a Maston’s chain pub. We did consider walking up the Nelson but being Saturday if they were full it would have been quite a hike back to eat, The Old Plough had music on so we guessed they would also be busy. What we hadn’t bargained on was how busy the Boathouse would be. We had to wait about 20 minutes just for a table and even longer for the food. Just as well they do food until 10pm. The have a large menu and two, two course meals came out at under £19 Probably one of the cheapest places we have eaten and it was all fine with nice fresh vegetables.

This morning we set off about twenty passed ten down to the marina to wind, I think its the first time Diana has ever done this. On the way I took a photo of the old cast iron water point as 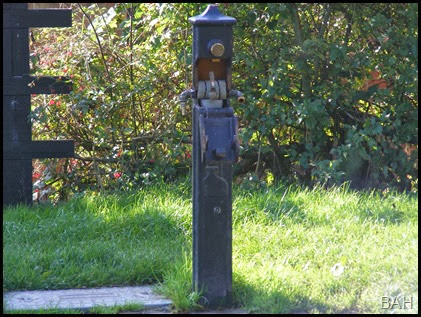 they won't be around much longer. CaRT has decided they don’t comply with regulations now so are spending a fortune replacing them all with stainless steel ones. I don’t know of many regulations that are retrospective. More gold plating with our money.

It looks as if Tony Redshaw has moved out since we were last at Braunston, another traditional skill gone. At Braunston Junction we turned right towards Hillmorton, we don’t want to be back in Napton until tomorrow so it was a choice of Hillmorton or Fenny Compton for today and Hillmorton won.

When ever we come this way I am surprised that this old railway signal is still standing on the dismantled railway line. 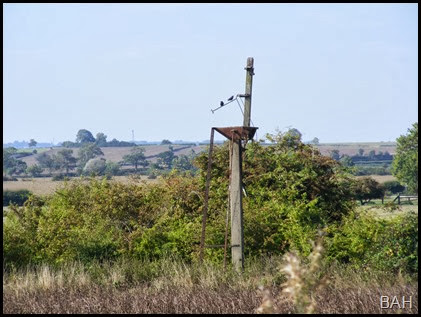 They knocked down most of the rest including bridges across the canal, but this got left

At bridge 77A there is an interesting piece of artwork, I think it must have been done with a stencil and I’m not sure why someone would go to so much trouble. 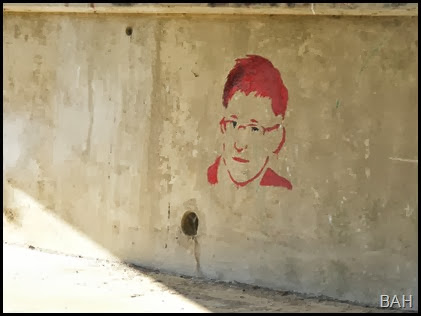 Just passed this we came to a boat that was adrift at the bows. It had a good thick line attached to the bows and the other end was ashore but not attached to anything, so I donated one of my old mooring pins to it and moored it up, unlike the boat we met just before it who just ploughed along.

We stopped at The Canal Shop, Hillmorton to fill with diesel at 87p/Lt and also looked round their chandlery/shop which is very well stocked. I was interested in looking at the Air Head composting toilets after hearing so much about them.

Once this was done we were off down the locks to wind, the official winding hole is below the bottom lock but I winded with ease outside the Bistro just above the bottom lock known as Grantham’s Bridge where a short arm runs off. It was then back up the next two locks again and on to the level all the way to the Napton flight.

I think the owners of the old stables at Tarry’s Bridge have done a wonderful job saving and converting the old stable block. It lay derelict for years waiting to fall down or for someone to do something, thankfully the latter. 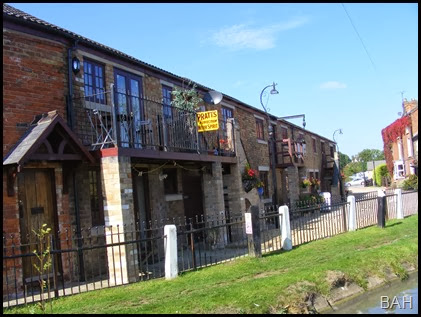 As we continued to chug in the bright sunshine towards Braunston turn we met NB Sirius coming towards us with Cath and John onboard, boaters we know from our time on the Fens, unfortunately due to moored and following boats we could only shout greetings as we passed. They had come up the Nene with NB Leo fellow bloggers.

At Braunston turn we turned to the right towards Napton Junction and the boat following who we locked Hillmorton with turned left to Braunston. Although Hillmorton Locks are narrow locks taking only one boat they are laid out on pairs side by side and its very useful if both crews help each other closing gates and drawing paddles etc.

We are now on a broad canal again where the South Oxford and the Grand Union share the same route. We carried on for about a mile before mooring for the night just before bridge 99. Once moored up the sun went to sleep the other side of bridge 99. 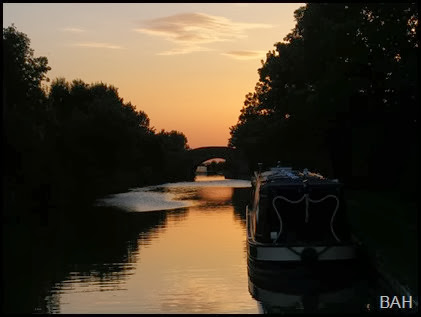 Fortunately Tony Redshaw hasn't shut down but the owners of the site where his workshop was have decided to sell the site and Redshaw's now have a workshop on an industrial estate in Daventry.

First the old taps then the old locks.....

See the pic and comments on the new ss watyerpoints on Fizzical Attractions blog.