We arrived in Salthouse Dock Sunday afternoon and after filling with water went for a wander round the area to see what was what and get our bearings.

Monday we went to the Maritime Museum and booked a visit to The Old Dock which is now all underground and had a snack meal in the museum cafe.
In the afternoon we walked around town and then went up the Freij Wheel of Liverpool for some great views over the City. During the day we spotted The Revolucion de Cuba who were offering 2 for 1 on a Monday so went for dinner there that evening.

Tuesday my Son-in-law's parents picked us up by car and we visited the Anglican Cathedral taking a trip to the top of the tower, despite the cold wind the top was quite sheltered and sunny until you looked through the parapet to the windward side. A good place for more skyline photos of Liverpool, then off to the Catholic cathedral at the other end of Hope Street. This is a real contrast to the Anglican one and does some very clever things with light. We then drove out of the City to see the Iron Man on the sands, a creation by Anthony Gormley. Unfortunately we arrived at high tide so didn't get to see them so we went off for lunch, returning late afternoon when the tide had receded. When they were set up they were all standing on the sand, now some are part buried and others have their foundation pole standing proud of the sand, this has led to a couple starting to fall over. On the way back to the boat we called in at Alma de Cuba a Latin American club/restaurant in the City that was once the Church of St Peter.

Wednesday morning we set off up to World Museum of Liverpool to try to get tickets to see the Terracotta Warriors The earliest tickets we could get were for 2-30 pm so we spent the morning looking at the rest of the museum also spending a bit of time in the Art Museum where we enjoyed a bowl of Scouse for lunch. We spent over an hour in the Terracotta exhibition, although its timed entry you can stay in as long as you like.
Walking back we went through China Town where the tallest Chinese arch outside China stands, all the street names are written in English and Chinese. 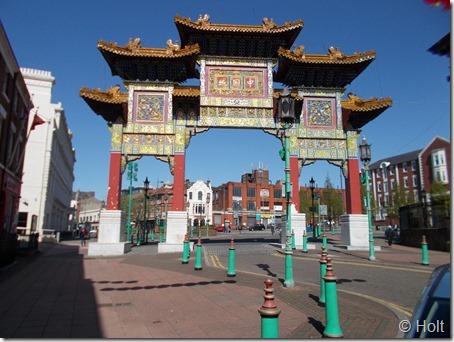 We spent a bit more time in the Anglican Cathedral looking at things in more detail.
In the evening again we ate at Revolucion de Cuba we had planed to go to the Italian Restaurant in Albert Dock but they had rather a long waiting list and there were a couple of large groups ahead of us, so we gave it a miss.

Thursday we started off by visiting the Liverpool Museum and returned to Harnser for lunch as we had food onboard that needed eating, we then walked up to Williamson Tunnels which are a bit of a mystery as to why they were all built. It was a good walk from the Dock to the tunnels a little over a mile so it took the afternoon up. 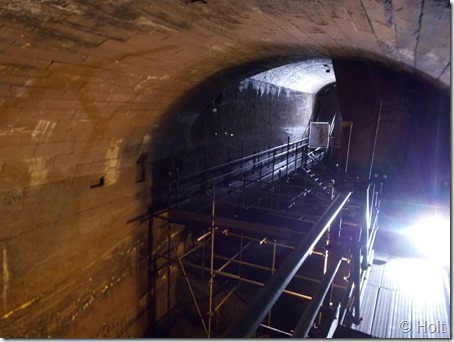 In the evening we went to a very nice Italian Restaurant Villa Romana up Wood Street so not quite so busy as the ones on the main streets.

Friday we went into two exhibitions on Mann Island, the first about Urban Splash which houses a very good interactive glass model of the City with lots of information about the city and the other The Open Eye Gallery which is work by Dr Wang about photos  and postings we make on social media. Just as we came out two more boat arrived in the Docks, three had left this morning.
As the day progressed the weather got better so we decided to walk to The Victoria Museum and Gallery This is a rather splendid building with a lot of tile work on the walls and stone stairways. 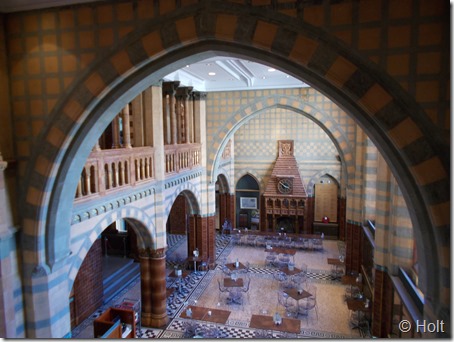 It was built as a university building in 1892 and now houses a large display of dentistry including Waterloo Teeth. For our last meal in Liverpool we went to the Bistro France and were there just in time for their fixed price 2 course meal and without doubt this was the best value for money meal we had all week. The reason we ate early was to get back to the boat to watch Liverpool Cathedral on Channel 5 on TV presented by Tony Robins.

This morning we said goodbye to Liverpool but that is on the normal Blog.