It was so nice yesterday that we had our second BBQ of the trip.

This morning again wall to wall sunshine, we set off a little after 10 am but only managed one swing bridge and about ½ hour before we came to a standstill at Crabtree Swing Bridge, it seems the bridge is powered by two 12 volt batteries in series on a trickle charger. With the amount of use the bridge got yesterday the charger couldn't keep up with the power used so the batteries are flat. When they get enough charge into the batteries they will open it once more and let all the waiting boats through. We were there for and hour and ten minutes.

We then stopped at Burscough Wharf for a bit of diesel followed by a visit to the other side of the canal to top up the water tank. Once that was all sorted we were off again, passing the old Ainscough mill on the right which has now been turned into apartments, I am not sure there cast iron roof supports are all original, the far two are of a different design. 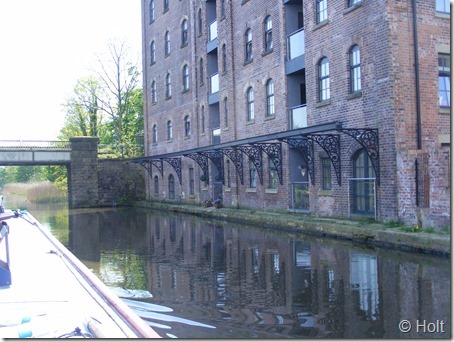 We than had to decide should today be a long day, making it a shortish run to Wigan tomorrow so we could catch the midday opening of the locks, or a normal day tomorrow and Wigan the following morning, we chose the latter and stopped at Parbold. The 24 hr visitor moorings are opposite the old windmill but on a busy 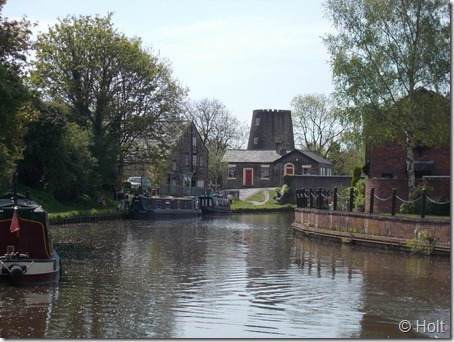 sunny Bank Holiday afternoon with all the people wandering about they didn't look too inviting so we continued past the old Graveling Dock and moored on the towpath a little further on. We walked back and looked at the old dock, someone has gone to the trouble of cutting down saplings and clearing the undergrowth but the only information I can find out about the dock on line is this from the Council Meeting minutes.

On our way back to the boat we noticed that mother duck had taken her 18 babies over the weir to dabble in the shallows the other side of the tow path, she then returned to the canal but there was a foot drop from the lip of the weir to where the ducklings were, so yours truly had to lay spread eagled on the towpath fishing up ducklings which were at arms reach below me stinging not only my arms but the tip of my nose in the process. When the last one plopped into the canal she stopped shouting at me and they all swam off. 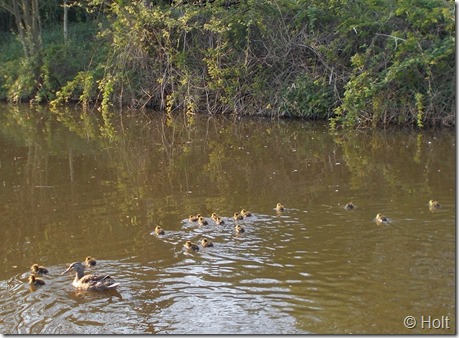 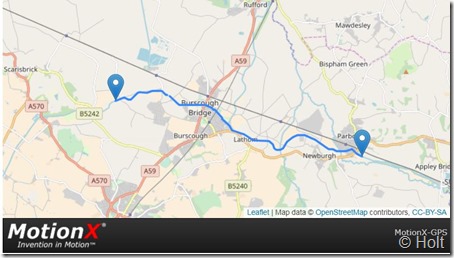 6 miles in 3 hours plus bridge breakdown.

Nice to see you passing by yesterday - we'd been grumbling about the grp owner who'd tied up on the water point an then gone for a walk! As for Crabtree bridge - we got stuck their for 2 and half hours... and THEN at the next bride, We're STILL stuck - it was 4 and half hours with the barriers down blocking the road last night before crt got the barriers up and then went home! Apparently, they're coming back at 8 this morning to try and get it working again. Assuming they do, we'll turn and then head up the Rufford branch to Tarleton for to meet some friends recently returned from the ribble link.