Over night the water level in the pound rose a little bit so by the early hours we were actually afloat and the ropes were slack, this meant from time to time the boat would bang against submerged rocks.

Today the weather had missed summer and gone to autumn, it was slightly below chilly and required both fleece and jacket, strange as last night in bed we were boiling. The boat we shared with yesterday wandered up and asked when we would be setting off and could he join us again, we agreed of course and said we would set off at 10am.

10am and I push off while Diana walks down to set the lock giving said boater a wave as she passed, I chugged slowly down to the lock, both top gates already open and Diana waiting but our friend still moored up, Diana walked back and gave him a knock, he hadn't seen me or realised the time, but he was soon in beside me.

An approaching walker kindly opened the top gates at the next lock for us, you don't need a windlass with these cloughs,as she passed Diana noticed she was wearing a top with a hire company logo on it.

The second lock has poetry engraved on the bottom gate lock beams but on this lock it has been picked out in gold. 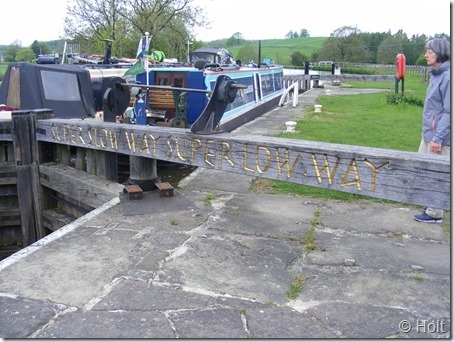 We met a group of walkers who got talking to Diana and one of them gave this stone to her, its a Peace Stone. 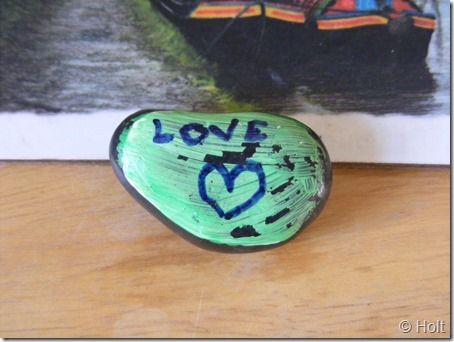 It turned out that the lady in green is walking from Liverpool to Leeds along the canal on a walk for peace. Barbara has a Facebook page about the walk with photographs and she had set off on the 6 May the same day as us and that we had passed each other on the way and now we were to arrive at Skipton together. Out of the group I think she was the only one walking all the way, but others were joining her for a day hear and there.

By now there was quite a strong breeze blowing across the canal and it caused a few problems getting off the lee bank. Next time we passed the group 2 ladies had left but they had gained another man and a dog. It was suggested that a hot cup of tea or coffee 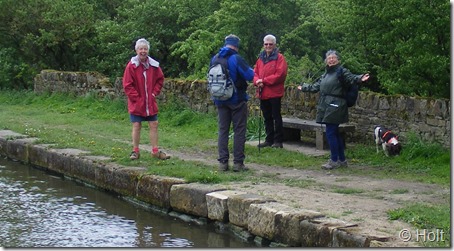 Once we were off again it wasn't far to Skipton. I have see many Offshore lifeboats on the inland waterways but I have never seen one that looks as if it was ether vinyl wrapped or painted. 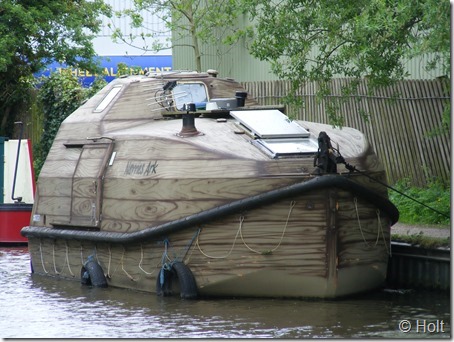 We soon passed the walkers once more , but they caught up as we did the last swing bridge, this was the heaviest so far and I had to get off and give Diana a hand to open it but she struggled to close it while people stood waiting to cross, never considering a push would speed things up a bit. We both moored on the bollards between Gawflat and Brewers swing bridge.

During the afternoon we did a bit of  exploring and visited the castle. This not only is one of the best preserved castles in the country, it also houses one of only two 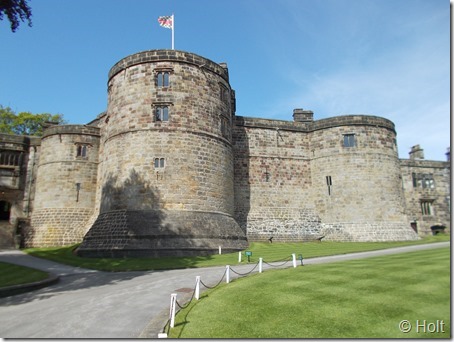 shell grottoes of the period designed by Isaac de Caus remaining in the UK today, the other is at Woburn Abbey. 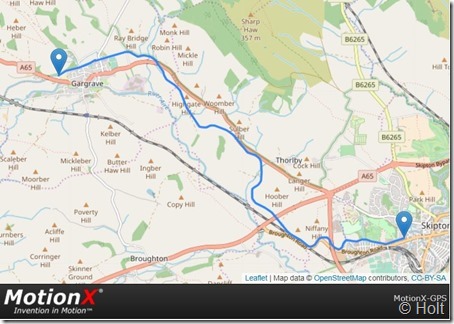 Hello B & D ... Stan here... Keep a lookout for Blue Heron while you are near Skipton. The couple who has her were last moored in that area.

On another note, I have a friend who goes to the same gym as me and owns a peniche on the Siene in Paris. She has it up for sale and is sending me pictures and details soon. It's been on the market for a year and I think it is going cheap. If you know of anyone looking for a barge in France, let me know and I will send the details.

It sounds like you guys are having a good time tup 'orth !!! Keep up the good trip reports and who knows, maybe we will meet again.

Our trip this year has been put off because of dry rot under a window in the study and also some termite work that has to be done NOW !!!