Last night we walked into the village and had a meal at The Masons Arms, The first courses were very good but not impressed by the sweets I'm sorry to say. It was quite cool as we walked back to the boat, as we sat in the boat we heard a noise and both looked round to see a part bottle of red wine making its way across the galley worktop, before landing on the floor. Luckily we use vacuum plugs on the bottles and also it didn't smash when it hit the floor. The level in the pound had changed, we had floated in over the rocks and the level fallen again. By now it was dark and unlikely any more boats would pass so I managed to push us out back into deep water and ease the stern line a bit more, after that we stayed on an even keel.

This morning we heard a few boats go by in the direction we wanted to go. We gave the last one half an hour and set the 500 yards to the lock only to find they were still in there, it looked like being a slow day, by the time we reached the third lock another hire boat was catching us up, 4 experienced hirers and slid into the lock beside us. We carried on together up the Bank Newton Flight where there was a lock keeper and a Volockie on duty, even so the boats ahead managed to turn a lock in front of a wide beam coming down and there were 4 boats in the top pound trying to come down when we got there. At the top of the flight we let the hire boat go first as they have to be back tomorrow morning in Barnoldswick. We went a short way and pulled over for lunch, this was just the start of the curly bit with the radio mast. 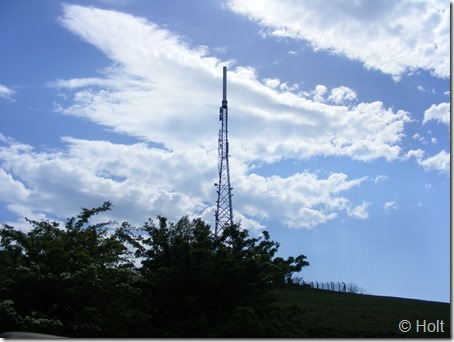 We did consider stopping here for the night but it was very exposed with the wind gusting over 25 mph. a little less that yesterday.

As I posted on our way to Leeds this section of canal is very twisty with a radio mast that you get to see from every quarter. Here are some photos, I have included a bit of the boat to give an idea where it kept appearing.

We carried on passing a steam powered Narrowboat on her moorings, you don't expect to see a modern Narrowboat with a steam plant , this one is called Whistle Down the Wind. 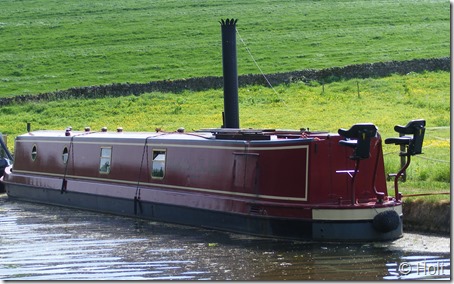 It was then on to where we had hoped to have moored on our outward journey at the bottom of the Greenberfield flight, this time it was empty. Once moored a little after 4pm we walked up the flight and bought ice creams at the small cafe at the top of the flight. It was just as well we did as just as we were walking back a boat came up and had both bottom paddles and all 4 top paddles wide open, the ironic thing was, when he was emptying the lock to come in he had to give the top paddles a touch as they had been left slightly open. 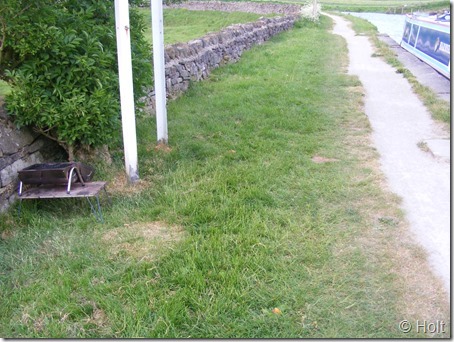 bush against the dry stone wall to try and keep out of the wind.